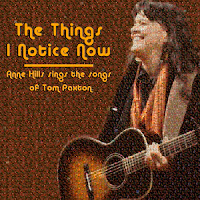 The Things I Notice Now: Anne Hills Sings the Songs of Tom Paxton is the second excellent tribute album to Tom Paxton in less than two years and if I hadn’t reviewed Tim Grimm’s Thank You Tom Paxton in 2011, I’d want to begin this review of Anne Hills’ tribute album with the story of how Tom propelled me into my life in folk music, back in the late-1960s, when I was 14 or 15 (you can read the story and the review of Tim's album at this link).

Anne is about the same age as me and discovered Tom’s music at about the same time. We also both began working with Tom at about the same time in the early-1980s. I began producing annual concerts for Tom in Montreal and Anne began singing with him on records and on stage. She sings harmonies on a bunch of Tom’s albums and they briefly joined forces with the late Bob Gibson to form a trio called Best of Friends.

In 2001, Anne and Tom did an excellent CD of duets called Under American Skies. 2001 was the second of the two year stint that Robert Resnik and I booked and programmed the Champlain Valley Folk Festival in Burlington, Vermont and I made sure both Tom and Anne were at the festival so that I could program an Under American Skies concert with the two of them. It was a highlight of the festival.

And now Anne has recorded this wonderful set of a dozen Tom Paxton songs – some dating back to the 1960s, one heard for the first time here. Three of the tracks are duets with Tom.

The album opens with a jazzy version of “The Things I Notice Now,” the title track from one of Tom’s albums from the late-’60s, featuring some really nice piano playing by co-producer Scott Petito (who plays various instruments throughout the album) and a trombone solo and fills by Chris Brubeck, a classmate from the days Anne first discovered Tom’s songs. The track sets a high standard that is matched on each of the 11 songs that follow.

While it’s had to pick favorites, a few of the others would include “Mother,” a poignant song sung from the perspective of woman addressing the birth mother she never knew (as much as I like Tom’s version, this is a song that is even more compelling when sung by a woman); “Dogs At Midnight,” which paints a sad picture of a coal mining town and the slow death that is a consequence of miners’ breathing coal dust; and “Time to Spare,” a look back to youth and the changes the years bring.

The three duets with Tom are “Early Snow,” which reflects on an increasingly disappearing way of life; “Hold On To Me, Babe,” of the most beautiful of Tom’s early love songs; and “When Princes Meet,” an allegorical ballad about princes and kings who make wars and the poor men who must fight them. While the song dates from the time of the Vietnam War, and was certainly inspired by that war, it could well be about almost all of the wars that have been fought over the centuries.

The new song, “Redemption Road,” is a beautiful winter-of-life song that weds Tom’s lyrics to Geoff Bartley’s lovely melody. Geoff recorded it as an instrumental, just called “Redemption,” on his album, Blackbirds in the Pie.

Tom's catalog is among the deepest of any songwriter I know (and I know more than a few). So deep that Anne’s album has no songs in common with Tim Grimm’s tribute from last year, while the gorgeous love song, “Every Time,” is the only song in common with Carolyn Hester’s A Tom Paxton Tribute from 1999.