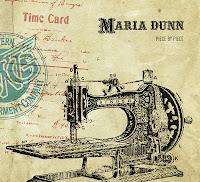 I’ve long admired the superb work of Edmonton-based singer and songwriter Maria Dunn. She’s well-versed in traditional folk music, and like such songwriters as Woody Guthrie, Tom Russell, Si Kahn and Tom Paxton, has a wonderful and all-too-rare ability to write outside of herself from the perspective of other people with complete authenticity.

Piece By Piece, Maria’s latest project comprises just eight songs and runs just 29 minutes, but the suite of songs inspired by the waves of women immigrants who worked at the GWG clothing factory in Edmonton between 1911 and 2004 – and which is sung from some of their perspectives – is one of this year’s folk music masterpieces.

Some of the stories Maria tells in these songs reflect the working life of the GWG workers. “Speed Up,” is a call-and-response song reflecting the tempo of factory work and the pressure to increase the speed of the work. The song’s rhythms, reflecting the South Asian origins of some of the workers, are set by the beats of Ojas Joshi’s tabla.

In the poignant “Blue Lung,” Maria sings as a woman at the end of her life suffering from the effects of pulmonary fibrosis brought on, she believes, by her years of breathing denim dust on the factory floor – suffering that is not so different from that of coal miners suffering from black lung disease. Shannon Johnson’s violin adds much to the poignancy of the arrangement.

Some of the other songs reflect the lives or times in the lives of the GWG workers. In “I Cannot Tell You (The Whole Story),” Maria movingly sings as a woman from Vietnam, who grew up during the war there and left her family behind, at their insistence, for the chance of a better life in Canada. Although specific to one person’s story, it’s also a universal reflection of so many immigrants – particularly refugees.

In “Shareholder’s Reel,” Maria sings about contract negotiations from the class perspective of the woman who was the union local’s president in 1972 when the GWG factory was sold to Levi Straus. Terrific playing by Shannon on fiddle and Michael Lent on bass perfectly complement Maria’s voice, guitar and accordion.

From the first song to the last, it is obvious the utmost care and attention to detail was paid to the stories of the women who worked in the GWG factory. Combined with Maria’s skills as singer and musician, and as an empathetic songwriter with a great ear for dialogue, Piece By Piece is destined to be a folk music classic.