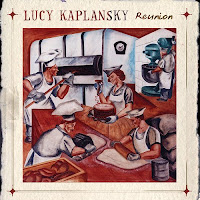 Family is a thread that runs through many of the original songs on Reunion, Lucy Kaplansky’s seventh solo album (Lucy’s original songs are written in collaboration with Richard Litvin, her husband).

The theme is established in “Scavenger,” the opening track, a song that could be interpreted in several different ways. One interpretation might be that it’s sung from the perspective of a refugee, far from home and family, trying to make his or her way alone, far away from loved ones. Or, perhaps, it’s a song sung from the perspective of a person who has chosen their own path in the world but understands that we are shaped and formed by our family relationships. “You may walk yourself alone/Through the hills of the night/But you’ll walk with the ones you love/In the valley of your life/You’ll always stand with the ones you keep/In the valley of your life.”

In the poignant “Mother’s Day,” she reflects on her loving and happy relationship with her daughter, a relationship made possible by another mother. “I’ve had a picture in my head all day/A mother wraps up her baby and walks way.”

The album’s centerpiece is “Reunion,” a song about two important family reunions in Toronto. In the verses, she recalls a 1971 trip – she would have been about 11 then – to her father’s hometown of Toronto for a big family reunion beginning with a visit to her grandmother’s bakery. During the reunion she comes to realize how much of the family is inside her father, who left Toronto for the U.S. as a young man (much like, perhaps, the protagonist in “Scavenger”). And, in the chorus, Lucy recalls another trip to Toronto, 40 years later, and another reunion with her Canadian cousins, all of whom, like herself, have lost their fathers. “Here we are together/Just daughters and sons/This is our reunion.”

In three of the most moving songs, Lucy reflects on the passing of her parents. In “I’ll See You Again,” she sets the scene of the night her parents met and of their final parting. In “My Father’s Son,” she sings from her father’s perspective, at the end of his life, as he repairs his relationship with Lucy’s brother, and in “Sleep Well,” she wishes a goodnight to her dying mother.

Lucy is also a gifted interpreter of songs she didn’t write and offers four excellent covers on Reunion including superb versions of “The Beauty Way,” written by her Red Horse mate Eliza Gilkyson, and, in this year marking the centennial  of Woody Guthrie’s birth, “This Morning I Am Born Again,” a set of Woody's joyous lyrics set to music by Slaid Cleaves.

The cover painting, by the way, is a scene from Lucy’s grandmother’s Toronto bakery. It was painted by Avrom Yanovsky, a noted political cartoonist who once worked at the bakery and the father of Lovin’ Spoonful guitarist Zal Yanovsky. 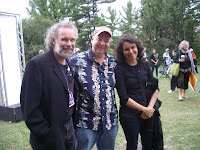