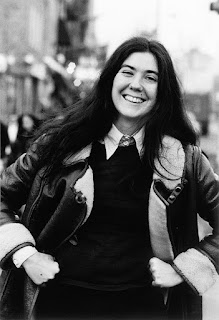 This Friday evening, June 15, I’ll be in Toronto to attend Love Over and Over – The Songsof Kate McGarrigle, the Luminato Festival’s tribute to my late friend Kate McGarrigle at Massey Hall.

The concert is a fundraiser for the Kate McGarrigle Fund which supports research into sarcoma, the form of cancer which claimed Kate’s life in 2010.

The concert is being curated by Joe Boyd, who produced the first two Kate & Anna McGarrigle albums in the 1970s and The McGarrigle Hour album in 1998, and will include performances of Kate’s songs by such family members as Anna and Jane McGarrigle; Rufus and Martha Wainwright; Dane, Sylvan and Lily Lanken; longtime friends and musical associates like Chaim Tannenbaum and Joel Zifkin; and a wide array of artists including, among others, Emmylou Harris, Peggy Seeger, Bruce Cockburn, Ron Sexsmith, Jane Siberry and Robert Charlebois.

I'm sure it will be a fabulous, poignant evening filled with great songs, laughter and tears.

My friendship with Kate dates back to the early-1970s. I worked extensively with Kate and Anna from 1974 to 1980, producing concerts in Montreal and as an agent arranging concerts at such venues as the National Arts Centre (Ottawa) Convocation Hall (Toronto) and Carnegie Hall (New York). Later on, I wrote about Kate and Anna often for such publications as the Montreal Gazette, the National Post and a major cover feature in Sing Out! magazine. As well, Kate and Anna were my frequent guests on the Folk Roots/Folk Branches radio program.

My remembrance of Kate written just after she passed away is at this link.

Since then, I’ve also written reviews of Oddities, a collection of Kate and Anna’s previously unreleased tracks at this link, and Tell My Sister, the 3-CD collection which includes re-mastered versions of the first two albums – Kate & Anna McGarrigle and Dancer with Bruised Knees – as well as an absolutely essential collection of early solo and duo demos at this link.