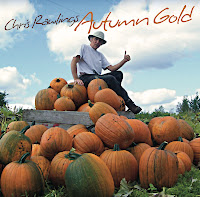 Chris Rawlings was one of my favourite local singer-songwriters when I first started hanging out on the Montreal folk scene back around 1969. He was then in the early stages of his solo career after spending a few years as part of a band called Rings and Things. Forty years ago this fall, when I started my first concert series at Dawson College in Montreal, Chris headlined my second concert presentation. And when I started running the Golem Coffee House in 1974, Chris was one of my frequently-presented artists. Some of the material on this collection of live tracks and previously unreleased studio recordings dates from those days.

Among the highlights are a couple of topical songs written from perspective of a Quebec anglophone. “Farewell to Quebec,” recorded live in Toronto in 1989, is a bittersweet farewell that captures well the feelings of so many people caught up in great anglo exodus from Quebec that became a tidal wave in the 1970s and ‘80s (and which still continues to this day).

And “Hey René,” recorded in 1976, is a reaction to the election of Quebec’s first separatist government under René Lévesque. One of the most prophetic lines in the song says, “What will you do when the contract comes due and the union bosses that supported you want more?” We found out the answer to that in 1982 when Lévesque and his finance minister, Jacques Parizeau, rolled back public sector wages by 20% in what was the most draconian anti-labour legislation in Canadian history.

Other highlights include a 1972 recording of “House of D,” covered back in the day by Christopher Kearney, a folk-rock song that reaches out to a teenage girl caught up in a cycle of abuse and detention and Chris and Paul Lauzon’s dreamy setting of William Butler Yeats’ “Lake Isle of Innisfree” recorded live in 1998 (but which I remember from back in the 1970s).

I particularly liked hearing Chris’ versions of two of the late Wade Hemsworth’s classic songs. “The Log Driver’s Waltz,” recorded in 1972, includes harmonies from Wade himself and three original members of the Mountain City Four: Anna McGarrigle, Peter Weldon and Jack Nissenson, while the solo version of “The Wild Goose,” recorded at the Wade Hemsworth Tribute Concert in Montreal in 2002, is beautiful and haunting. 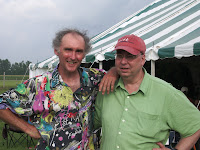 The album ends with a rollicking version of Chris’ own classic, the tongue-twisting “Pearl River Turnaround” recorded live at Expo ’86 in Vancouver with fiddler Christophe Obermeir.

Chris precedes “Pearl River Turnaround” with a song written and sung by Obermeir at Expo ’86 on which Chris backs him on recorder. As the one track featuring a different lead singer, it interrupts the flow and unnecessarily throws the album off its Rawlings-track.

Pictured: Chris Rawlings and Mike Regenstreif at the 2007 Branches & Roots Festival in Ormstown.