Bob Dylan turns 70 on Tuesday (May 24) – 50 years and a few months after he first arrived in New York City with a repertoire of folksongs learned from Odetta and Woody Guthrie records.

Within a relatively short time, Dylan was one of the premier folk artists in Greenwich Village and was well on his way to becoming, arguably, but certainly in my opinion, the most important and influential songwriter ever.

I’m reminded now of something the young Dylan said.

In 1963, talking to Nat Hentoff for the liner notes to The Freewheelin’ Bob Dylan about his ability to pull off a song as difficult as “A Hard Rain’s A-Gonna Fall,” Dylan said, “It's a hard song to sing. I can sing it sometimes, but I ain't that good yet. I don't carry myself yet the way that Big Joe Williams, Woody Guthrie, Lead Belly and Lightnin' Hopkins have carried themselves. I hope to be able to someday, but they're older people.” 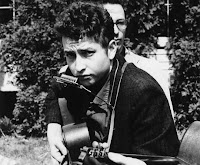 Dylan was all of 21 years old when he made that statement. Woody Guthrie – hospitalized with the Huntington’s disease that would kill him in 1967 – and Lightnin’ Hopkins were both then around 50. Big Joe Williams was about 60 and Lead Belly had died in 1949 at 61.

Dylan now is significantly older than Williams, Guthrie and Hopkins were then – and older than Lead Belly was when he died. The young Dylan was highly influenced by those legendary artists who had come along decades earlier – his own influence would soon surpass all others. He changed what was possible to do in the context of a song.

And, yes, he does carry himself with all of the musical gravitas that Williams, Guthrie, Lead Belly and Hopkins had then.

Dylan’s music has been part of my life for most of my life. I bought Dylan’s first few LPs in 1967 when I was 13 and have listened intently to everything he’s released over the past 50 years (and a fair bit of what’s never been released). I’ve seen him in concert a bunch of times and I’ve read most of the good books (including his own Chronicles Volume One), and maybe a few too many of the bad books, that have been written about Dylan over the years.

I’ve written about a bunch of Dylan albums and books over the years in newspapers and magazines (and here on the Folk Roots/Folk Branches blog), I’ve produced and hosted a bunch of radio specials on him and his songs, but I don’t know Dylan. He is easily the most enigmatic, the most unknowable, person I’ve ever encountered.

As I noted in my book review of Bob Dylan in America by Sean Wilentz in the current issue of Sing Out! magazine, I’ve long thought that one of the reasons I so appreciate so much of Bob Dylan’s oeuvre is that (I think) we’ve listened to so much of the same music. To the traditional folk and blues songs, and to so many of the musicians who played them. When Dylan sang, “no one can sing the blues like Blind Willie McTell,” I knew what he was talking about because I’ve listened to all those old Blind Willie McTell records. When he borrows lines or settings from Woody Guthrie or Lead Belly or others, I know where they come from. Dylan’s music is rooted ever so strongly in what Greil Marcus termed the “old weird America,” the folk music and the folk-rooted blues and country music that developed in particular regional locations and began to spread everywhere in the first half of the 20th century.

This leads me to the point I wanted to make when I started writing this little essay. Even before Dylan went electric at the Newport Folk Festival in 1965, there have been commentators who’ve said that Dylan left folk music behind. I don’t think that’s at all true. To this day, Dylan’s songwriting continues to be rooted in the “old weird America.” Dylan didn’t leave folk music behind when he embraced rock ‘n’ roll, he changed what was possible in a folk music context; both in how it’s played and how it’s expressed. I hear folk music at the heart of so much of Dylan’s songwriting -- from his earliest work to his most recent.

And anyone who thinks that folk music is necessarily defined by acoustic guitars does not understand folk music.

When jazz musicians like Charlie Parker and Dizzy Gillespie developed bebop, they weren’t leaving jazz behind, they were changing it; even though some of the traditional jazz greats like Louis Armstrong were slow to accept or understand what Parker and Gillespie were doing. Just like some in the folk establishment of 1965 were slow to accept and understand what Dylan was doing. Bob Dylan changed folk music in much the same way Charlie Parker changed jazz.

As far as I’m concerned, Dylan playing his folk-rooted songs with rock musicians in his time is not very different from the Weavers playing folksongs with the Gordon Jenkins Orchestra in theirs.

By the way, Louis Armstrong was a folksinger, too.

For folks in Montreal: Billy Bob Productions is hosting a Bob Dylan 70th birthday celebration on Tuesday night, 8:00 pm, at Petit Campus, 57 Prince Arthur East. Tickets are $5.00 at the door.