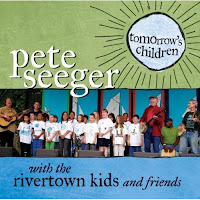 Despite vocal powers that have diminished with age, Pete Seeger remains a vital activist, song leader and musician. Tomorrow’s Children, most of which features Pete singing with or backing up the Rivertown Kids, a group of 20 school kids from around his hometown of Beacon, New York, as well as some other kids and several adult musical friends, is an inspiring album that captures the great sage of the folk music scene doing something that he’s always loved: singing meaningful songs with members of the generation that will carry on making a difference into the future.

Pete is present on every song – variously as a musician, a chorus-singer or a song leader. But it is his inspiration on the youngsters of the Rivertown Kids – and on the adult contributors, too – that makes this album unique.

The manifesto of the Rivertown Kids is heard in “We Sing Out,” a collective song the kids wrote based on the melody of Tom Paxton’s “Can’t Help But Wonder Where I’m Bound.” The kids reject the notion that they should be seen, not heard, as they declare their interest in protecting the environment, family farms and local communities, their solidarity with the sick and the poor, and their commitment to justice and equality. Their message is repeated in the series of new verses they wrote to “We Shall Not Be Moved,” the old spiritual that Pete helped popularize as a union and civil rights anthem.

Among the adult contributors to the album are Dar Williams and David Bernz, who are heard with Pete on “Solartopia,” a new song inspired by Harvey Wasserman’s book of the same name on green energy; Sarah Underhill, who sings “River,” my favourite Bill Staines song, with Pete; and David Amram and Victorio Roland Mousaa who perform “Mastinchele Wachipi Olewan (The Rabbit Song),” a Lakota round dance song.

Ultimately, I think this album is a step in Pete’s passing of the torch to younger generations. There is a version of “Turn, Turn, Turn” with new children’s verses written by Toshi Seeger (Pete’s wife), and a version of Pete’s classic “Quite Early Morning,” sung with the Rivertown Kids, that says “And so keep on while we live/Until we have no more to give/And when these fingers can strum no longer/Hand the old banjo to young ones stronger.”

Pete wrote “Quite Early Morning” back in the late-1960s. Clearly, he wasn’t ready to give up his banjo or guitar 40-something years ago. Now, at 91, Pete Seeger still has more to give and his fingers continue to keep on strumming. And Pete's still got a firm hand on the torch.