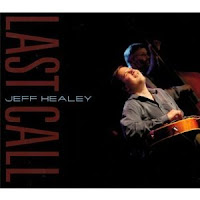 The late Jeff Healey (1966-2008) was – with great reason – one of Canada’s most popular blues-rock guitarists and an exciting bandleader. He was also an expert on the hot jazz and swing of the 1920s, ‘30s and ‘40s – I remember some great radio shows he hosted on the CBC playing old 78s – and, in the last decade or so before cancer took his life, went public as a traditional jazz singer, trumpet player and guitarist, touring and recording a series of fine albums with the Jazz Wizards, a group distinct from his blues-rock band. As much as I enjoyed hearing Jeff play blues-rock, I much preferred hearing him in the jazz context.

And, as much as I enjoyed hearing Healey in the Jazz Wizards, he was, apparently, frustrated by the fact that he couldn’t be singing and playing the trumpet and multiple guitar parts all at once. So, for his final recording project, Jeff decided to do an album on which he’d overdub most of the parts himself. Just two other musicians, violinist Drew Jurecka and pianist-clarinetist Ross Wooldridge, join him on selected tracks.

All 14 songs are a joy to hear. Listen to his amazing playing – rhythm guitar, lead guitar and trumpet – and singing on “Some of These Days.” It’s just one guy doing the job of four musicians and sounding better and tighter than most bands.

Healey turns in another amazing two-guitars-and-vocal performance on “Hong Kong Blues,” one of my favourite songs by the great Hoagy Carmichael, one of my all-time favourite songwriters.

There are several wonderful instrumentals including “Guitar Duet Stomp,” which, as the title implies, is Healey playing two guitar parts; and two guitar-violin duets – “The Wildcat” and “Black and Blue Bottom” – with Jurecka that pay tribute to the great guitar-violin recordings of the ‘30s by Eddie Lang and Joe Venuti.

Healey recorded this album just a few weeks after undergoing major surgery. You can’t tell from listening to his great playing and fine singing that he wasn’t in great shape. Sadly, he lost his battle with cancer about a year after laying down these tracks.