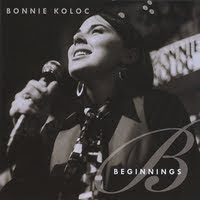 I first met Steve Goodman back in 1973 or ’74 when he did a four-night stand at the soon-to-be-defunct Karma Coffee House in Montreal. Hanging out with him then, we talked a lot about music and it was from Steve that I first heard of Bonnie Koloc. She was one of the best singers around, he told me.

I took Steve’s advice and sought out Bonnie’s early LPs – and what she’s done since – and she’s never failed to draw me in with her gorgeous voice and intelligent folk-pop (with touches of blues and jazz) approach.

Bonnie’s first LP came out in 1971 but she was already well-established as one of top performers on the Chicago folk club scene that included such peers as Steve, John Prine and Fred Holstein. But the music on Beginnings – released for the first time more than 40 years after it was recorded – dates from two 1969 live sets recorded by Rich Warren, then the student host of a folk music show on his college’s radio station. (For many years now, Rich has been the host of the legendary Midnight Special program on WFMT in Chicago.)

Listening to Beginnings, it’s quite obvious that Bonnie was already a great singer and performer; in fact, I would say it’s more even more obvious here than on some of her early LPs with their studio polish.

The sweetly sad “Rainy Day Lady” is Bonnie’s only original among the 16-song, hour-long set mostly devoted to her superb interpretations of tunes drawn from such well-known writers as Bob Dylan and Joni Mitchell as well as from local artists like Eddie Holstein and Steve Goodman (who was still completely unknown beyond the Chicago folk scene).

Among my favourites on the CD are Bonnie’s versions of Dylan’s “Just Like Tom Thumb’s Blues (despite a couple of lyrical deviations)” and “Just Like a Woman”; Goodman’s “Song for David”; Eddie Holstein's "Victoria's Moring"; and one of the best interpretations I’ve ever heard of Mitchell’s “Both Sides Now.”

She also does fine versions of such classics as Billie Holiday’s “God Bless the Child,” George Gershwin’s “Summertime” and Bessie Smith’s “You’ve Been a Good Old Wagon.”

Bonnie is supported throughout the album by the excellent playing of guitarist Ray Frank and bassist George Stevens. John Mathis plays flute on three songs and two others feature a guy named Bob (from the bar) on harmonica.