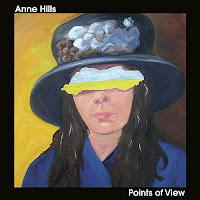 “Anne Hills is such an exquisite singer that it’s understandable that people might be swept up in the pure beauty of her voice and thereby overlook her writing. That would be a mistake. For me, Anne’s writing, in songs like “Follow That Road” and many others, is as direct, melodic and deep as any work being done today. She is quite simply one of my absolute favorite songwriters.” --Tom Paxton

My old friend Tom Paxton gets no argument from me about the merits of Anne Hills as either a singer or songwriter. Almost every album she’s ever made – whether as an interpretive singer or singer-songwriter; or as a solo or collaborative artist – is a favourite of mine. And that includes Points of View, her first solo album in more than a decade devoted primarily to original material. And, like Tom says, these songs are direct, melodic and deep.

The album opens with “I Am You,” a universalist anthem, co-written with Michael Smith (another of my favourite songwriters), that describes all races, religions, genders, and orientations as part of the same human family.

Among my favourite tracks is a pair of winter themed songs. In “Pennsylvania,” Anne describes scenes from the highway as she makes her way through the state during a heavy winter snow storm. Then, in “Two Year Winter,” co-written with Bill Jones, winter storms and cold seem like a metaphor for a long period of sadness or depression. That sadness in “Two Year Winter” eventually gives way to the promise of spring and the joy of childbirth in “A Plain Song.”

Other favourites include “My Daughter & Vincent van Gogh,” which begins with Anne describing a family outing to a van Gogh exhibit that seems to dissolve into an imagining of the family as part of a van Gogh painting, and “I’m Nobody,” a song which helps to understand what it might be like for someone, particularly a child, in dire need of affirmation.

Along with these and other original songs, there are a couple that Anne didn’t write or co-write including an absolutely exquisite version of Leonard Cohen and Sharon Robinson’s “Alexandra Leaving.”

The CD cover is a self-portrait of Anne that’s reminiscent of van Gogh’s self-portrait in a hat and coat with his ear (or where his ear used to be) bandaged. Instead of a bandaged ear, Anne’s painting has her eyes covered by a blindfold (that sort of looks like a piece of lemon meringue pie).