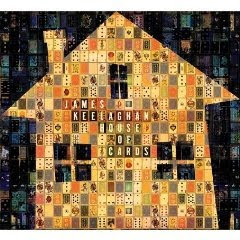 About a year ago, I was chatting with Keelo at the OCFF Conference in Ottawa and he was telling me that he’d just returned from the Celtic Colours Festival in Cape Breton where he’d been one of several songwriters who spent a week in a house together in an experiment in collaboration. Half of the songs on House of Cards came out of those collaborations, including the opening track, “Safe Home,” co-written with David Francey, a lovely song about being away from home, of missing home, but which recognizes that he’s part of a travelling fraternity which will often be away from home.

Other collaborations include “Next To You,” a pretty love song co-written with Rose Cousins, and “Medusa,” co-written with Karine Polwart, whose title, I assume, is a reference to the Canadian Armed Forces’ Operation Medusa in Afghanistan, but which could be about the uncertainty that accompanies any kind of military operation.

Of Keelo’s solo compositions, my favourite is “McConnville’s,” which he sings from the perspective of a barman in a pub in Northern Ireland telling the story of a tragedy that befell one of his regular patrons. It’s a modern composition with the authenticity of a traditional folksong.

Another highlight is the poignant “Circle of Stone,” about the parting of two people – the songs mentions they’re friends, but it also could also apply to siblings or lovers – as one leaves to follow a journey that the other cannot take.

Note: James Keelaghan will be in concert on Thursday, October 15, 8:00 pm, at Club Lambi, 4465 St. Laurent in Montreal as part of the Wintergreen Concert Series. Call Hello Darlin’ Productions at 514-524-9225 for information or tickets.

A James Keelaghan concert always carries my recommendation as an event not to be missed.

Posted by Mike Regenstreif at 10:48 PM