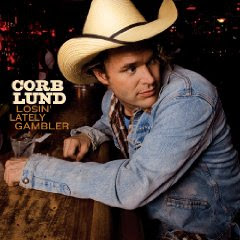 Alberta’s Corb Lund took a bit of a musical detour on his last record – Horse Soldier! Horse Soldier! – a concept album revolving around themes of war and horses. With Losin’ Lately Gambler, Corb is back to his old tricks writing authentically about cowboys and life on the ranches and small prairie towns of Western Canada. Having been a teenaged rodeo champion, and coming from a family that’s ranched in Southern Alberta for more than a century, Corb’s authenticity is in his jeans and in his genes.

Several of these songs are based directly on Corb’s own life. His past as a teenaged rodeo champ is fodder for “Steer Rider’s Blues,” a infectious rockabilly tune about being a 14-year-old rodeo winner who still can’t impress the girls, while “A Game In Town Like This” describes the underground poker scene he used to frequent where the stakes were so high “who would go to Vegas with a game in town like this?”

As a kid in Calgary in the 1950s and ‘60s, I well remember the Chinook winds that could turn a 40 below day into 40 above – it was measured in Fahrenheit back then – in a matter of an hour or two. I liked Chinook winds but Corb has a different take on the winds in “Chinook Wind,” a song that describes the effect the winds can have on ranch men and ranch land.

Among the other highlights on Losin’ Lately Gambler are “Alberta Says Hello,” a lonely kind of song about a hurtin’ Albertan missing a woman back east in Montreal, “Devil’s Best Dress,” a gunfighter ballad that would’ve done Marty Robbins proud, and “Long Gone to Saskatchewan,” a tribute to the province next door that’s kind of in a Stompin’ Tom Connors vein (Corb acknowledges the influences of Stompin’ Tom and Alberta songwriter Tim Hus by dropping their names in the song).

After 11 new songs, Corb ends the album with an infectious live medley of the traditional “Rye Whiskey” and his own barroom party tune, “Time to Switch to Whiskey,” songs he first recorded on his 2003 album, Five Dollar Bill, recorded in front of an enthused Australian crowd.

Posted by Mike Regenstreif at 10:19 PM