Singing Through the Hard Times: A Tribute to Utah Phillips 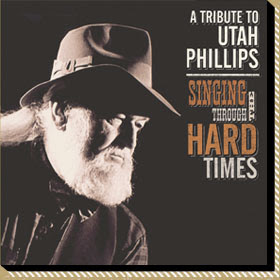 Note: This review, from the Summer 2009 issue of Sing Out! Magazine, is posted here at the request of several of the artists who contributed to the collection.

Talk about timing, this 39 song, 2-CD collection tribute to the late Bruce (Utah) Phillips begins with Magpie, Dan Schatz, Emma’s Revolution – and a bunch more folks playing instruments and singing the chorus – performing “Singing Through the Hard Times,” a previously unheard song of Bruce’s that sure sounds like the perfect song for the recessionary hard times we’re living through right now. In fact, many of these songs would fit that bill.

This obviously loving collection includes 29 songs recorded specifically for this project and 10 more that were previously released. I counted 29 songs that were written or co-written by Bruce, three more that he didn’t write but which were part of his repertoire, and another seven that were in the spirit of some aspect of his music or persona.

There are far too many highlights in this collection for me to mention, but I would call your attention to the already-mentioned title song, and the excellent versions of “I Remember Loving You” by Tom Paxton, “Goodnight Loving Trail” by Gordon Bok, “Green Rolling Hills of West Virginia” by Emmylou Harris and Mary Black, “The Soldier’s Return” by Rosalie Sorrels, “He Comes Like Rain” by Finest Kind and “Look for Me in Butte” by Mark Ross.

I’d also draw your attention to Fast Rattler’s version of the rarely-performed “Paddy Welcome Back.” Fast Rattler’s lead singer is Bruce’s son, Brendan, who I remember as a baby and toddler.

Perhaps another volume would be in order. Off the top of my head, I can easily think of another album’s worth of songs and a whole bunch of appropriate artists to sing them.