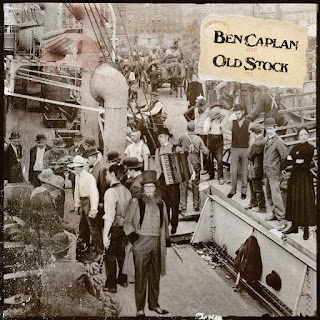 One of the most magnificent productions I’ve seen in recent years was “Old Stock: A Refugee Love Story,” a play co-created by playwright Hannah Moscovitch, who grew up in Ottawa, singer-songwriter Ben Caplan and director Christian Barry, which tells the story of Hannah’s great-grandparents who fled antisemitism in Romania in 1908 for Canada.

Ben plays The Wanderer, the play’s narrator who moves the story forward with a series of monologues and songs – most of them klezmer influenced – that he performs with a theatricality that is equal parts Tevye and Tom Waits. The Old Stock CD collects the songs that Ben performs in the show along with a couple of his monologues, and while it helps to be familiar with the play, these pieces stand on their own and include songs that relate both explicitly and implicitly to the plays narrative. Some of the latter serve as modern day Talmudic interpretations as imagined through lenses of the period (early 20th century) or of today.

As well as original material written or co-written by Ben, Hannah and Christian for the play, Old Stock includes two well-chosen songs written by Geoff Berner, an instrumental by Danny Rubenstein and a passage from Jeremiah set to music by Rabbi Shlomo Carlebach.

Warning: Some of the songs on Old Stock have mature themes and are not suitable for young children or those offended by profane language and/or frank references to sexuality.