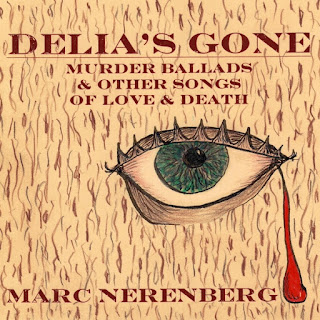 In the introduction to the liner notes for Delia’s Gone: Murder Ballads & Other Songs of Love & Death, veteran Montreal folksinger and old-time banjo player Marc Nerenberg – who I’ve known for close to a half-century – suggests that it’s probably the years he spent as a criminal lawyer “that led me to the misguided notion that murder ballads would be a fit subject for an album.”

Of course, there’s a rich tradition of murder ballads in folk music and six of the 11 songs Marc offers here are drawn from traditional sources – but I suspect that it’s a combination of the lawyer and storytelling folksinger in Marc that led to some of his adaptations. For example, in “Delia’s Gone,” the well-traveled murder ballad that launches the album and give it its name, he researched the true story of the 14-year-old girl’s murder and added some original lyrics that flesh out the story. And in “Little Sadie,” he adds elements to the story that were inspired by an attempted murder case in which he was the defense attorney.

One of my favorite tracks on the album is Marc’s version of “Saint James Infirmary Blues,” the New Orleans variant of “The Unfortunate Rake,” an old British ballad about death from venereal disease – an element to the story that is usually implied but not explicit in the song. Marc adds a verse that leaves the listener with no doubt about what the song is about.

Another highlight of the album is “Toby,” a song written by Brien Lavene, one of several singer-songwriters who were around the Montreal folk scene from the mid-1960s to mid-1970s as Vietnam War resistors (Jesse Winchester being the most prominent). Written in the first-person, “Toby” tells the story of a professional card hustler – who gets himself killed when he’s caught cheating – from the perspective of the young associate learning the trade.

One of the most interesting of Marc’s original songs is “Delia’s Dilemma,” which re-imagines the characters of Delia (specifically the gambling woman from Blind Willie McTell’s version of “Delia’s Gone) and Toby (from Brien Lavene’s song), who come together in a story that encompasses gambling, love, philandering and murder. Another is “Bleaching Bones,” a tale encompassing love, tragedy and mystery in telling the origin story of an old woman living in a desert.

This is not an album meant for casual listening but there is much here for those prepared to be drawn in by a combination of Marc’s mastery of traditional banjo styles (there are no other musicians), his idiosyncratic singing, and the set of richly detailed ballads.