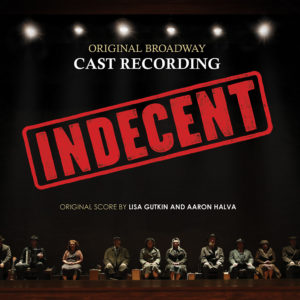 (This review was published in the Ottawa Jewish Bulletin.)

Paula Vogel’s play, “Indecent,” which had a Tony Award-winning run on Broadway in 2017, tells the story of Yiddish playwright Sholem Asch’s controversial – especially for the times – play, “The God of Vengeance,” which was produced successfully in both Europe and New York, where it played for several years on the Lower East Side. In 1923, an English-language version opened and closed in one night in New York when the entire cast was arrested on obscenity charges.

Central to the Broadway production of “Indecent” is the musical score created by violinist Lisa Gutkin, well known in klezmer music circles as a member of the Klezmatics, and accordionist-pianist Aaron Halva. The pair were joined onstage by clarinetist Matt Darriau, also of the Klezmatics. While a few of the pieces in the score, including “Ale Brider” and “Bei Mir Bistu Shein,” are familiar, most of the numbers were composed by Gutkin and Halva specifically for the show.

You don’t really have to know the plot of the play to appreciate this music. Whether instrumentals featuring the band or songs with vocals by the production’s actors, the music will appeal to anyone who loves traditional klezmer or Yiddish theatre music.

The Segal Centre in Montreal has a production of “Indecent” set to run from April 28 until May 19.