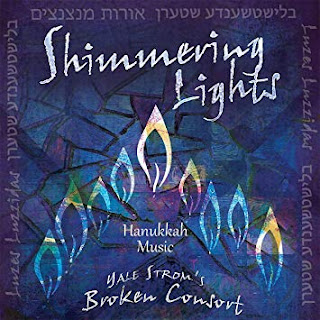 On Shimmering Lights: Hanukkah Music, violinist Yale Strom – a long celebrated innovator in Jewish music – along with singer Elizabeth Schwartz and an ensemble including guitar, oud and string players, offers a fascinating, multilingual musical tour through Hanukkah musical traditions and songs from Jewish cultures around the world.

The album opens with a version of “Maoz Tzur” from the Moroccan tradition featuring some outstanding oud playing by Amos Hoffman that contrasts beautifully with Elizabeth’s vocals and the string ensemble before shifting into a joyous klezmer-style version of “Khanike, Oi, Khanike” with verses sung in both Yiddish and English.

From there, we hear an extended version of “Kita’l Tas,” sung in Ladino and played in the Turkish Sephardic tradition, and “Latkes,” a Yiddish original by Yale based on the traditional Yiddish song “Bulbes” (in the 1960s, “Bulbes” was the template for “Nothing,” one of the best songs by the Fugs). Early in its nine-minute playing time “Latkes” is quite beautiful, as sung by Schwartz, before shifting into an exciting, Roma-influenced romp by guitarist Fred Benedetti, violinist Yale and the other musicians.

Some of other highlights include a jazzy version of “Akht Kleyne Brider” in Yiddish and a beautiful interpretation of the traditional Sephardic song “La Fiesta de la Hanukia” in Ladino.

The album ends with “The Fool Over Yonder,” a new song written by Yale and Elizabeth in English that celebrates both Hannukah and a universal message of tikkun olam.

Most of the pieces on Shimmering Lights are quite long allowing the terrific musicians in Yale Strom’s Broken Consort lots of opportunities to stretch out soulfully. This is my favourite Hanukkah album since the Klezmatics released Woody Guthrie’s Happy Joyous Hanukkah a dozen years ago.