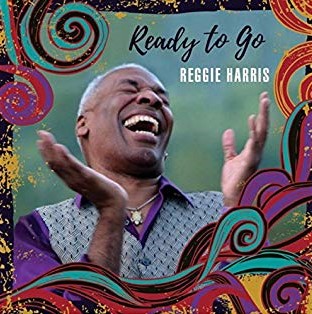 As I mentioned in a 2012 review of Kim and Reggie Harris' Resurrection Day, I wrote a feature story for Sing Out! magazine (“Kim and Reggie Harris: Building Bridges,” Summer 2007), and said I’ve long been inspired by Kim and Reggie – by their moving work as recording and performing artists, and by the deep commitment they have as activists who use their art to help make ours a better society.

For the past several years, with Kim Harris following an academic career, Reggie Harris has worked as a solo artist and in collaborations with other like-minded artists. Now, Reggie has released Ready to Go, his first and much-anticipated solo album.

Like virtually all of Reggie’s albums with Kim, Ready to Go is an inspired and inspiring set filled with much joy, some sorrow and a whole lot of hope.

The album kicks off with “Ready to Go,” the title track. Fueled by Gina Forsyth’s Cajun fiddling, the song is a call to action to stand one’s ground in the face of the Trumpian challenges now gripping the U.S. (and, by extension, the rest of the world).

One of the most poignant songs is “Love Guides the Wounded Heart,” a sad lament for the lack of meaningful change to American gun culture five years after the mass murder of 20 six- and seven-year-old children and six adults at Sandy Hook Elementary School in Newtown, Connecticut. The song was written a few months before the massacre at Marjory Stoneman Douglas High School in Parkland, Florida but could well serve on the soundtrack to the campaign launched by the brave young activists who survived that horror.

Another poignant song is “Hickory Hill,” a song that explores an aspect of Reggie’s shared family history with a distant white cousin that originated when the Hickory Hill plantation slave master fathered five children with one of the slaves.

Other favorites on Ready to Go include “Harlem Renaissance,” a snappy jazz tune that salutes and namechecks many of the literary and musical giants who rose to prominence in Harlem in the first half of the 20th century; and “Hunt the Whale,” Reggie’s sea chantey inspired by the story of seven African American sailors who served on the 1821 voyage of the Essex. That tragic voyage inspired Herman Melville’s classic novel “Moby Dick.”

The album ends with stirring versions of two songs from the 1960s, each featuring an added verse written by Reggie. Both Bob Zellner’s civil rights anthem “Been Down into the South,” adapted from an African American spiritual, and Bob Dylan’s “The Times They Are A-Changin’,” remind us how far we’ve come over the past-half century – and how far we still have to go.