Tom Russell – Play One More: The Songs of Ian & Sylvia 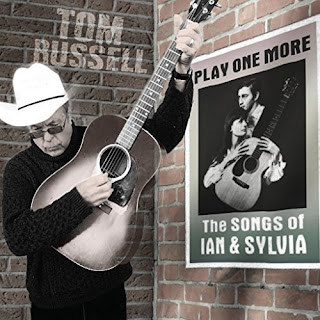 I got into record collecting as a kid in the 1960s and Ian & Sylvia’s LPs had a huge impact on me. They were a big part of my introduction to traditional folk music and to original, folk-based songwriting. By 1966, I owned all of their early LPs and kept on buying the new ones as they came out later in the ‘60s and early-‘70s. And I got to see them play live a couple of times. I still return to their music often – particularly the first five albums.

As a music journalist, I’ve written about the CD reissues of the Ian & Sylvia LPs and about both Ian Tyson’s and Sylvia Tyson’s solo albums. I've seen both of them live on many occasions and, in the 1990s, I produced a couple of shows in Montreal with Sylvia (a stage setting of Timothy Findlay’s “The Pianoman's Daughter” and a concert with Quartette, her group with three other great women singers). And I’ve done long (and separate) radio interviews with both Ian and Sylvia that have included extensive looks back at their Ian & Sylvia years.

Ian & Sylvia were also a huge influence on the young Tom Russell, who I’ve repeatedly referred to as the finest singer-songwriter of my generation. As a songwriter, Tom has collaborated with both Ian and Sylvia and on his new album, Play One More: The Songs of Ian & Sylvia, offers a remarkable tribute to Ian’s and Sylvia’s songwriting with eight songs from the Ian & Sylvia years and two more each from their solo years (including one of his co-writes with each of them).

The album opens with Ian’s “Wild Geese,” a gorgeous song from the 1967 LP So Much for Dreaming that vividly captures the Canadian countryside. It is one of many songs on the album to which Cindy Church, one of Sylvia’s partners in Quartette, lends her beautiful harmonies to.

Tom follows it with “Thrown to the Wolves,” a song he co-wrote with Sylvia and sang a duet with her on her 1994 album You Were On My Mind (not to be confused with the 1972 Ian & Sylvia LP of the same name). The ‘wolves’ motif comes up again at the end of the album on the astute western ballad “When the Wolves No Longer Sing,” a fairly recent song co-written by Tom and Ian that Ian recorded on Carnero Vaquero and that Gretchen Peters sang on Tom’s extraordinary folk opera The Rose of Roscrae: A Ballad of the West.

Three of my favorite songs on the album came from Ian & Sylvia’s 1966 LP Play One More: “These Friends of Mine” is one of my all-time favorite songs of Ian’s. I’ve always thought of it as a companion song to Bob Dylan’s “Bob Dylan’s Dream”; “Short Grass,” co-written by Ian and Sylvia, vividly captures what ranch life might have been like 60 or so years ago for a young cowboy like Ian; and “Play One More” describes a musician’s life on the road and a disintegrating relationship at home.

Each of the other songs is a highlight.

“Rio Grande,” from the 1970 album Great Speckled Bird (Ian and Sylvia’s band at that time, a pioneering country-rock band, was called Great Speckled Bird), co-written by Ian and Amos Garrett, is a cowboy’s lament set on the U.S.-Mexico border that seems predictive of the drug wars that would come to scar much of that border in later years.

“The Night the Chinese Restaurant Burned Down,” also from Sylvia’s 1994 album You Were On My Mind, is a beautiful song that may be based on Sylvia’s hometown of Chatham, Ontario. In the song, she recalls the night she and her best friend, young women ready to leave the town for the big city, hop on the last bus out of there.

Ian’s “Old Cheyenne,” first recorded on the Ian & Sylvia’s 1972 LP You Were On My Mind, is a sad one about a rodeo cowboy who can’t make a living at it, while “Sam Bonnifield’s Saloon,” first recorded on Ol’ Eon, Ian’s first solo LP from 1973, concisely captures a scene from a bar in the Yukon.

In Ian’s “Red Velvet,” from the 1965 LP Early Morning Rain, a prairie farmer laments how farm life just couldn’t hold the woman he loves, while “The Renegade,” a co-write by Ian and Sylvia from their 1968 album Nashville, relates the feelings of an indigenous man determined to return to the traditional way of life. Although written almost a half-century ago, the song seems particularly topical in view of what has become common knowledge in Canada about the residential school system which is referenced in the song and which was labelled “cultural genocide” a couple of years ago by the federal Truth and Reconciliation Commission.

Play One More: The Songs of Ian & Sylvia is a great tribute to Ian Tyson and Sylvia Tyson – to the remarkable songs they wrote and recorded as a duo in the decade between 1962 and 1972, and to the equally remarkable songs they’ve written (and co-written) in the decades since. The production is wisely kept minimalist with just Tom on vocals and guitar, Cindy on harmony vocals and Grant Siemens on lead guitar.

The album is capped off by two bonus tracks: previously unreleased demos by Ian & Sylvia from the 1960s of “Grey Morning” and “The French Girl.”

Play One More: The Songs of Ian & Sylvia will be released on May 19.

I played five of the songs from Play One More: The Songs of Ian & Sylvia on the April 29, 2017 edition of the Saturday Morning show on CKCU. The show can be streamed on-demand at http://cod.ckcufm.com/programs/128/32143.html.