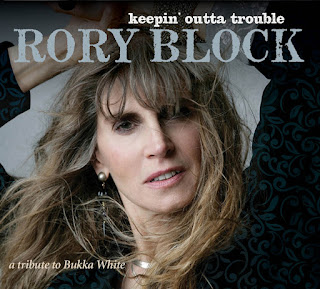 In 1974, when I was 20-years-old, I was a stage manager (area co-ordinator) at the Mariposa Folk Festival and one of the artists I got to work with that year at Mariposa was Booker “Bukka” White, a 68-year-old legend of the Delta blues. I wasn’t yet familiar with White’s recordings, but I knew some of his songs via recordings by Bob Dylan, Dave Van Ronk and Tom Rush. What I remember most, more than 40 years later, was White’s imposing presence sitting on stage with his steel-bodied National guitar, and the authority and power in his singing and slide playing. That June weekend in Toronto was the only time I got to see him play live. He died less than three years later.

Rory Block, who grew up in the folk music community in Greenwich Village, met White there in 1965, when she was about 15. “Watching him perform was transformative. Bukka had absolutely no mercy on the guitar and slammed it like Paul Bunyan wielding an axe,” she writes in the notes to Keepin’ Outta Trouble: A Tribute to Bukka White, the latest in her series of tribute albums to legendary blues artists she had the opportunity to know and learn from as a kid. Earlier releases in the series include tributes to Son House, Mississippi Fred McDowell, Reverend Gary Davis, Mississippi John Hurt and Skip James.

While Rory has often included a song or two she wrote about those artists on these Mentor Series tribute albums, along with her versions of their classic songs, she brings many more of her own songs to this project than ever before. Of the 10 tracks, half are Bukka White classics and half are Rory’s original songs inspired, in some way by him.

She opens the album with a pair of original tracks. In “Keepin’ Outta Trouble,” she gives us a couple of scenes from (or imagined from) White’s life: a fight in a Mississippi barroom that gets him in trouble and a prison term at Parchman Farm that ends when he impresses the governor with his music. Then, in the gospel-influenced “Bukka’s Day,” we hear about his hard life of work growing up, the influence of the church, his becoming a musician and again, of that fight that put him in prison. Ultimately, it’s a piece of blues philosophy about the saint and the sinner in all of us.

Rory’s songs later in the album include “Spooky Rhythm,” in which she pictures White as an itinerant musician, “Gonna Be Some Walkin’ Done,” which was inspired by White’s guitar part to his song “Jitterbug Swing,” and by an off-hand comment he made on a record, and “Back to Memphis,” a tribute to the music White played in Memphis so many decades ago.

Bukka White’s songs – covered with equal doses of respect for his original versions and Rory’s own creativity – include “Aberdeen Mississippi Blues,” “Parchman Farm,” and the often-covered “Fixin’ to Die Blues.”

My favorites of White’s songs in the set are the train songs, “New Frisco Train” and “Panama Limited,” a description of a train trip with the slide guitar duplicating the various sounds of the train as it makes it journey through the south.

Rory is the only musician and singer on the album but she sometimes fills out the sound by overdubbing more guitar parts, harmony vocals and creatively improvised percussion effects.

Like she had with the other albums in her Mentor Series tribute, Rory inspired me to pull Bukka White’s own recording off the shelf and listen again to that powerful musician I encountered at Mariposa so many years ago.