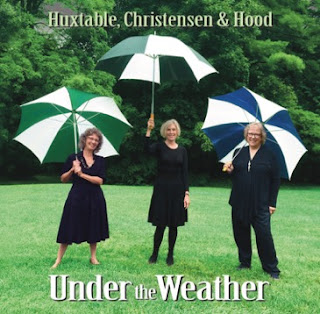 Huxtable, Christensen & Hood – Teresina Huxtable, Carol Christensen and Liz Hood – began playing coffeehouses and folk festivals in the 1970s. Around 1980, they released their first LP, the excellent Wallflowers, which effectively mixed traditional folksongs with a few of Terri Huxtable’s originals – mostly sung in glorious three part harmonies. A second LP, Melancholy Babies, came out around 1986 and added a couple of old pop songs to the folk and original material.

Finally, 30 years later, comes Under the Weather, a third album from the trio – a set that expands on the folk, original and pop material to include songs from three superb folk-rooted songwriters who have passed away in recent years.

They open the Under the Weather with a lovely version of “Talk to Me of Mendocino,” my late friend Kate McGarrigle’s exquisite ode to New York State, the California coast and lost love. Later in the set are superb versions the late Victoria Armstrong’s “Santa Fe River,” and the historical narrative “John D. Lee,” written by my late friend Bruce “Utah” Phillips, which vividly describes an 1857 massacre in Utah. All three of these borrowed songs are among the highlights of the album.

Other highlights include “The Isle of St. Helena,” a Napoleonic ballad that effectively uses snare drums and flutes to help provide a military backdrop to the arrangement; a spine tingling solo a cappella version of “Open the Door Softly”; a Nova Scotia version of “Since Love Can Enter an Iron Door,” featuring the voices on top of a reed organ and accordion arrangement (with an effectively a cappella verse); and Terri’s “The Stroll,” whose lyrics evoke high school dances from the long ago and whose arrangement suggests early rock ‘n’ roll.

It’s nice to hear the voices of Huxtable, Christensen & Hood again after all these years. 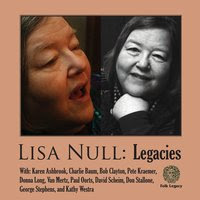 Lisa Null is another artist from the 1970s that I hadn’t heard in decades – save for a track on Singing Through the Hard Times, a Utah Phillips tribute released in 2009.

Although she hadn’t made a new album in more than 30 years, Lisa decided to record much of her repertoire after a serious illness in order to ensure the songs she loves will remain. On Legacies, a 2-CD boxed set, Lisa offers a 72-minute collection of traditional folksongs, a 63-minute collection of mostly original songs, and a 68 page booklet of extensive notes.

My memories of Lisa from back in the day are of a singer of traditional folksongs who worked with guitarist Bill Shute on the folk festival circuit. And, indeed, the CD of traditional material shows that she still knows how to communicate the stories and feelings at the essence of these songs whether singing a cappella or working with some simple, but beautifully arranged accompaniments.

Among the traditional highlights are “The Banks of Champlain,” a historical ballad with piano accompaniment by Donna Long, in which a woman mourns her lover’s death in a War of 1812 battle; “Dink’s Song,” the achingly beautiful song collected by John Lomax more than a century ago that Lisa sings a cappella; and “I Went to See My Mother,” an Ozark song from the singing of Almeda Riddle that Lisa performs with banjo player Bob Claypool.

I don’t recall hearing Lisa singing her own songs back in the day so the second CD in this collection came as a surprise. The only one I previously knew was “I’m Going Home to Georgia,” a beautifully realized song from the perspective of an old man full of regrets, that I remember from one of Sally Rogers’ early LPs. Lisa sings it here with an unusual harp (David Scheim) and electric bass (Pete Kraemer) arrangement that works perfectly.

Other highlights from the collection of “Newer Songs and Tunes” include “Turn Me Loose and Let Me Go,” a song of comfort and farewell also featuring Scheim and Kraemer; “Come Take Me Home Again, Kathleen,” an a cappella song written in the style of a traditional Iriah ballad about the historical troubles in Ireland; and the bouncy “Follow the Money,” with Lisa on electric piano, one of several instrumental tunes she composed.

The second CD also includes several songs Lisa did not write and I was most taken by the quietly powerful “Andy Goodman (To His Mother),” a song written by Jean Ritchie following the brutal 1964 murders of civil rights workers Andrew Goodman, James Chaney and Mickey Schwerner. Sung from Goodman’s perspective, it’s a song I’d never heard before (although I own many of Jean’s recordings and saw her perform numerous times).

Like Huxtable, Christensen & Hood, it’s good to hear Lisa again after all these years.