Happy Traum – Just for the Love of It 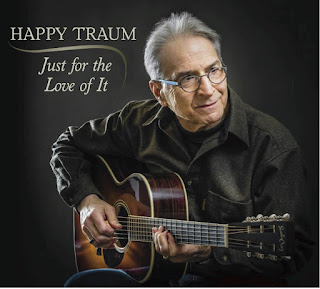 HAPPY TRAUM
Just for the Love of It
Lark’s Nest Music
happytraum.com

Another decade has gone by, but the wait for Just for the Love of It, another very sweet gem of a CD, was worth it. As usual, Happy has impeccable taste in choosing a program of great traditional folk and blues songs or contemporary songs written in the tradition and even better taste in the way he arranges them with both reverence for his sources and the originality of his always creative fingerpicking guitar and warm singing. He also surrounds himself – track to track – with just the right set of supporting musicians for each song and arrangement.

Because I have multiple versions of every one of these songs in my collection (in some cases many versions) there’s an instant familiarity to every track. But, despite, that familiarity, Happy made each and every one of them sound fresh the first time listened to the album – and they still sound fresh no matter how many times I’ve played the CD.

The album kicks off with Happy’s interpretation of Brownie McGhee’s version of the traditional “Careless Love Blues.” I have versions of Brownie playing the song solo and with Sonny Terry on harmonica. With Happy doing a great job on guitar and vocals, John Sebastian does an equally great job on harmonica.

Other favorite tracks include the traditional “Deep Blue Sea,” learned from Pete Seeger and featuring David Amram on pennywhistle and terrific harmonies by Larry Campbell and Teresa Williams; a contemplative, solo version of Pete’s “Sailing Down My Golden River”; an arrangement of the traditional “Things Are Coming My Way” that is, like so many Georgia Sea Island songs, completely infectious; and a defiant-sounding version of Woody Guthrie’s classic “I Ain’t Got No Home,” that also features a great harmonica part by John Sebastian.

There is also a full-on version of Bob Dylan’s “Crash on the Levee (Down in the Flood),” featuring Happy’s son, Adam Traum on slide guitar and harmony vocals. This song was one of several duets Happy recorded with Dylan in 1971 for Dylan’s Greatest Hits, Vol. 2 album.

There are another eight songs on Just for the Love of It. I could just as easily have cited any of them as a highlight. I hope it’s not another decade before Happy decides to do another album.