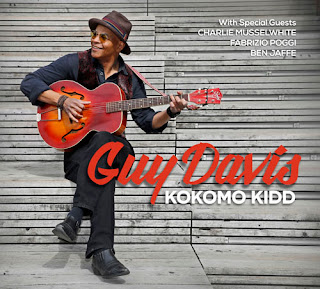 As I said two years ago in the intro to my review of Juba Dance, over the past two decades, Guy Davis has been one of the premiere interpreters of traditional acoustic blues and one of the songwriters whose in-the-tradition work has kept the genre vital and alive in modern times. In the hands of Guy and a few of his peers, the traditional blues forms remain timeless – as relevant now as they were 30, 50 or 80 years ago. All of the recordings Guy has released since the limited edition Guy Davis Live in 1993 (repackaged as Stomp Down Rider in 1995) have been both a homage to Guy’s musical forebears and a crucial contribution to contemporary music.

Guy is in great form on Kokomo Kidd with eight new songs and five covers – a couple of which are very pleasant surprises.

The album opens with the bouncy “Kokomo Kidd.” Guy assumes the persona of Kokomo Kidd, a seemingly ageless bootlegger/dealer/pimp/fixer, who supplies liquor, drugs and women (or men) to top Washington politicians during Prohibition and through to the present where he continues as an ultimate dirty trickster. Guy’s banjo playing sets the rhythm, his voice tells the story in a kind of blues-based pre-rap style, and the bottom is filled by some terrific tuba playing by Ben Jaffe of the Preservation Hall Jazz Band.

Other favorites from among Guy’s originals include “Taking Just a Little Bit of Time,” which celebrates stepping out of the hectic pace of contemporary life “for just a little bit of time”; “Shake It Like Sonny Did,” a great tribute to country blues harmonica legend Sonny Terry (who I had the opportunity to know and work with in the 1970s); and the delightfully catchy “Maybe I’ll Go,” a nod to Mississippi John Hurt.

With the support of Professor Louie on Hammond organ, Guy moves into classic soul ballad mode on the powerful “She Just Wants to be Loved,” an empathetic piece about a lonely woman who has never found the love she’s spent her lifetime looking for.

The most moving piece on the album is “I Wish I Hadn’t Stayed Away So Long,” in which Guy poignantly laments that his life as touring musician meant the he “got home too late to say goodbye” when his mother (the legendary actress Ruby Dee) died.

Among the songs Guy didn’t write are three blues standards. Among them is Willie Dixon’s “Little Red Rooster” done in classic Chicago blues style with Charlie Musselwhite on harmonica.

The pleasant surprises I mentioned are a soul ballad version of Bob Dylan’s “Lay Lady Lay” and a reggae version of Donovan’s “Wear Your Love Like Heaven.” Both songs so familiar and yet so fresh-sounding in these interpretations.