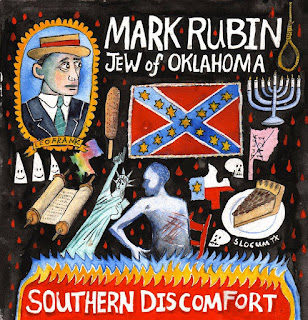 Mark Rubin is an interesting – and interestingly eclectic – musician. As you can surmise from his self-identification, he grew up in Oklahoma but I first became aware of him during his long sojourn in Austin, Texas when he and Danny Barnes formed the Bad Livers, a duo that brought a fresh, punk attitude to old-time music. The Bad Livers got a lot of airplay in the early days of the Folk Roots/Folk Branches radio show. Mark plays a bunch of instruments including bass, banjo, guitar, tuba, and mandolin and I’ve also enjoyed his work as sideman for many artists and as a member of several other groups covering a wide range of roots music styles and genres from country to klezmer. These days, Mark is based in New Orleans, one of the most fabled of all music meccas.

Southern Discomfort is Mark’s first solo album and it, too, covers a wide range of roots music styles and genres from country to klezmer – more than half of it original material.

For me, the most affecting part of the album are the fourth and fifth tracks, “The Murder of Leo Frank” and “Rumainyan Fancy.”

“The Murder of Leo Frank” is Mark’s powerful ballad – very effectively set to the same traditional tune as Florence Reece’s “Which Side Are You On?” – telling the story of Leo Frank, a Jewish pencil factory manager in Atlanta who was framed for the murder of Mary Phagan, a 13-year-old worker in the factory, in 1913.

After his false conviction, Frank was sentenced to death but an overwhelming campaign across the United States led the Georgia governor to commute his sentence to life in prison. But, then, Frank was kidnapped from the jail and lynched by a Ku Klux Klan mob calling itself “The Knights of Mary Phagan.” As Mark references in “The Murder of Leo Frank,” the early country musician, Fiddlin’ John Carson, wrote and performed an anti-Semitic song about the case that helped fuel the mob mentality.

The story of this case is one that I’ve been aware of since 1967 when I received the book, A Little Girl is Dead by Harry Golden, as a bar mitzvah present. Golden’s full length account of the case and its aftermath was unforgettable. Mark’s song very effectively captures the zeitgeist of the case.

The final lines of the song – nominally addressed to fellow Jews – are “Next time you're at services/Say a Kaddish for Leo Frank." The words are a powerful lead-in to “Rumainyan Fancy,” an intense, traditional  klezmer tune played by fiddler Adam Moss with Mark on guitar. The arrangement, which builds in speed and intensity as it progresses, allows for four needed minutes of contemplation.


There’s also fun to be had on the album. The neo-jug band arrangement to “Key Chain Blues,” for example, makes it fun to listen to the narrator embrace his recent unemployment, while “Seriously (aka Too Much Weed)” is doper’s anthem with an absolutely delightful Dixieland arrangement.

The album cover art coveys the discomfort of the album title, and particularly “The Murder of Leo Frank,” with images that include the Confederate flag (which, thankfully, came down in South Carolina this week), a trio of idiotic looking Klansmen, a noose, Leo Frank, a menorah, and an African-American man with whip marks on his back.