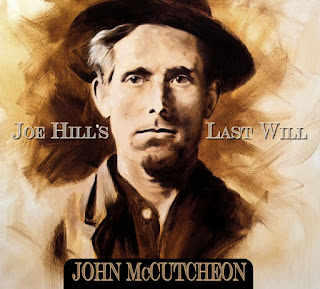 Joe Hill (1879-1915) is a legendary figure in the history of folk music and the labor movement. A Swedish immigrant (born Joel Emmanuel Hägglund), he immigrated to the United States in 1902 and learned to speak English as a migrant laborer. Sometime around 1910, Hill joined the Industrial Workers of the World (IWW), the Wobblies, a union that believes in industrial unionization, “One Big Union,” as opposed to trade unionism, and began to write songs for them – often set to tunes borrowed from popular songs of the day. In some ways, Woody Guthrie followed in Hill’s footsteps a generation later.

In 1914, Hill was arrested in Salt Lake City, Utah for a murder he did not commit, and was tried and convicted. He was executed by firing squad on November 19, 1915 at the age of 36.

Like many of my generation, I initially learned about Joe Hill from the song written about him in the 1930s by Alfred Hayes and Earl Robinson via recordings by Paul Robeson and recordings and performances in the ‘60s by Pete Seeger and Joan Baez. Much of what I know about Joe Hill, though, came from another great Wobblie songwriter, my late friend Bruce “Utah” Phillips, who I heard sing many of Joe Hill’s songs, and tell many stories about him, over a period of many years.

This year is the 100th anniversary of Hill’s execution and John McCutcheon marks the occasion with Joe Hill’s Last Will, an inspired and inspiring collection of Joe Hill songs – a couple of which I’m hearing for the first time on this CD, others which I know from recordings by such artists as Utah Phillips, Pete Seeger, Cisco Houston, and Hazel Dickens.

One of the astounding things that hits home about these songs is the so very brief period in which they were created. The earliest is from 1911 and the latest from 1915 – just a four year period. But, although these songs date from a century and more ago and are essentially topical songs, most – particularly with John’s infectious and creative arrangements – seem relevant to the (economic) times we’re living in now.

While the entire album is entirely praiseworthy, some of the finest moments include “It’s a Long Way to the Soup Line,” a song Hill wrote in prison in 1915 to the tune of “It’s a Long Way to Tipperary”; “The Preacher & the Slave,” a parody of “In the Sweet Bye and Bye,” that Hill used to mock the Salvation Army (the “Starvation Army”) and their brass bands that were used back in the day to disrupt IWW rallies; and the rousing finale, “There is Power in the Union,” on which John is joined by a bunch of fellow workers from the American Federation of Musicians, Local 1000 (the folksingers' local), and the Seattle Labor Chorus.

Certainly the most moving song is the title track, “Joe Hill’s Last Will,” whose words Hill wrote the day before his execution and which were smuggled out of the prison by a guard.

My will is easy to decide,
For there is nothing to divide.
My kind don't need to fuss and moan –
“Moss does not cling to a rolling stone.”

My body? Ah, If I could choose,
I would to ashes it reduce,
And let the merry breezes blow
My dust to where some flowers grow.

Perhaps some fading flower then
Would come to life and bloom again.
This is my last and final will.
Good luck to all of you.
Joe Hill

“Joe Hill’s Last Will” has been set to music several times over the years – I have a bluegrass version on the collaborative 1976 album by Country Cooking and the Fiction Brothers – but John’s lovely version is to a melody of his own. (I’ve also heard it performed as recitation by both Utah Phillips and the late Tex König.)

I’ll also note that a couple of the songs, “Overalls & Snuff,” and “Where the Fraser River Flows,” are of special Canadian interest as they were written for the strike against the Canadian National Railroad in 1912.