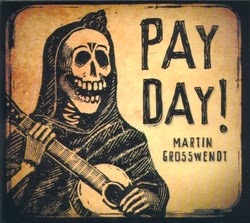 In 2004, reviewing Call and Response, Martin Grosswendt’s second album in Sing Out! magazine, I wrote, “Hey Martin, I surely do not want to wait another 25 years for your third album.” Yes, that superb sophomore album came out a quarter-century after Dog on a Dance Floor, released by Philo Records in its pre-Rounder Vermont era.

Well, the wait for Payday! Martin’s third album, was considerably shorter at only a decade, but still too long – but, like its predecessor, it was well worth the wait.

The Philo studio in Vermont was about a two-hour drive from Montreal and it was one of my main stomping grounds for much of the 1970s. I first met Martin there, circa 1973 or ’74, when he was recording with artists like Bruce “Utah” Phillips, Mary McCaslin, Jim Ringer, Tom Mitchell and many others. I don’t think he’d turned 20 yet, but I knew from the first time I heard him play that he was already one of the finest interpreters of traditional country blues (and other kinds of music as well).

Coming about 40 years after that first encounter, Payday! is the work of a masterful musician who performs songs drawn from the great blues legends – and from several contemporary songwriters, including himself – with a deep-from-the-well authenticity and intensity that is rarely achieved by contemporary interpreters. And that authenticity applies to his singing as much as it does to his playing.

While it’s a completely solo album – Martin plays guitar on most tracks but switches to banjo or fiddle occasionally – there is a fullness to Martin’s arrangements that makes other musicians unnecessary.

While he can growl with the best of them – as on his own song “Liquored Up and Twisted,” where his solo guitar seems like a full Chicago-style band – Martin is one of those too-rare artists who can be tender in his singing and bring an appreciation of the real poetry of the blues. This is particularly evident in his masterful interpretations of such songs as Mississippi John Hurt’s “Payday,” “Delia,” and Uncle Dave Macon’s “Mournin’ Blues,” a slowed down, sorrowful version of “Morning Blues,” that brings new meaning to the song.

Martin’s inventive use of the banjo on Muddy Water’s “I Can’t Be Satisfied” and J.B. Lenoir’s “Down in Mississippi,” gives those songs such a different spin from the originals that I hear them, too, in whole new lights.

And the instrumental fiddle medley of his own “Blues for Danny Poullard” and Joseph “Bébé” Carriere’s “Blue Runner” beautifully combines Cajun and blues influences.

Two of my favorites on the album are contemporary songs I first heard Martin perform live decades ago. His versions of Richard Thompson’s “Down Where the Drunkards Roll” and Bobby Charles’ “Tennessee Blues” are both definitive and beautiful.

Hey Martin, I surely do not want to wait another decade for your fourth album.