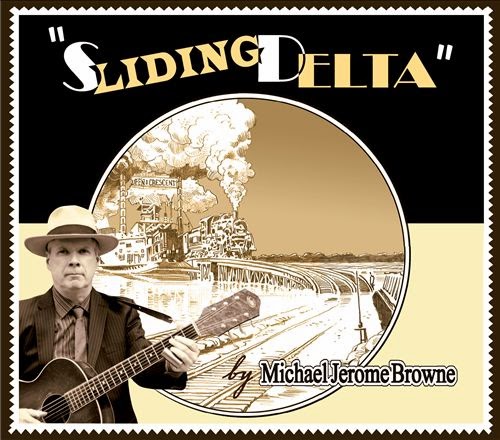 About 40 or so years ago, Marc Nerenberg excitedly told me about Michael Browne, a 14-year-old blues prodigy in Montreal. Soon, at a Sunday night hoot at the Yellow Door in Montreal, I heard him play and was suitably impressed by his obvious technique in playing traditional blues. But, as a much more mature 20- or 21-year-old, I wasn’t quite ready to take such a young kid seriously as a bluesman. I remember a similar reaction when I first met Colin Linden when he was 12 or 13.

Over the next years, I saw Michael play from time to time in coffee houses and, more often, busking on Prince Arthur Street or in the metro. It was obvious that both his technique and his understanding of the traditions were continuing to grow quickly. About 30 years ago, he began playing guitar and singing with the Stephen Barry Band – Montreal’s finest electric blues outfit. By then there was absolutely no question about taking Michael seriously.

With Michael continuing to develop as a solo performer on the street and with his lead vocals a highlight of several Stephen Barry Band albums, it was probably inevitable that he’d eventually get around to recording under his own name and in 1998 – by then known as Michael Jerome Browne – he released his self-titled debut. As I wrote in my Sing Out! magazine review, it was “an eclectic tour de force of various shades of the blues with some equally accomplished side excursions into Cajun and Appalachian music. Browne's soulful singing is matched by the depth of his instrumental powers on various guitars, banjos and fiddles.”

Since that debut, Michael has released a series of fine albums masterfully exploring a variety of traditional roots styles including various blues styles, Appalachian folk songs, Cajun music, and much more.

On Sliding Delta, Michael returns to the kind of early blues that first inspired him and it's a stunning selection of songs drawn from African American blues legends who were all gone by the time he got started four decades ago. Except for the final track, this is a purely solo album featuring Michael’s vocals and instrumental virtuosity – mostly on guitar but occasionally on banjo or mandolin or with added racked harp.

Without exception, I savored each of the 14 sublime performances, but a few of my very favorites include Mississippi John Hurt’s “Sliding Delta,” performed on the 12-string with a natural ease that is so reminiscent of Hurt himself; Memphis Minnie’s “Frisco Town,” a bouncy blues on which Michael shows how terrific the blues can be when played on the banjo; and Charley Patton’s “When Your Way Gets Dark,” on which he demonstrates how beautiful the interplay between voice and slide guitar can be on early Delta blues.

A couple of my other favorites – Henry Thomas’ infectious “Bull Doze Blues,” again played on the banjo (and it’s nice to hear someone playing a Thomas song other than “Fishing Blues”) and Crying Sam Collins’ “My Road is Rough and Rocky,” a variant of the better-known “Railroad Bill” – are drawn from the songster tradition that knew no boundaries between blues, folk songs, even early pop and jazz tunes.

After playing solo on the first 13 tracks, Michael ends the album with a fine duet with the great Eric Bibb on “Choose Your Seat and Sit Down,” a spiritual originally recorded in the 1930s by Dock Reed and Vera Ward Hall.

Michael launches Sliding Delta with concerts here in Ottawa on Wednesday, January21, at Irene’s; and in Montreal on Saturday, January 24 at Petit Campus; and in Toronto on Sunday, January 25 at the Rivoli.