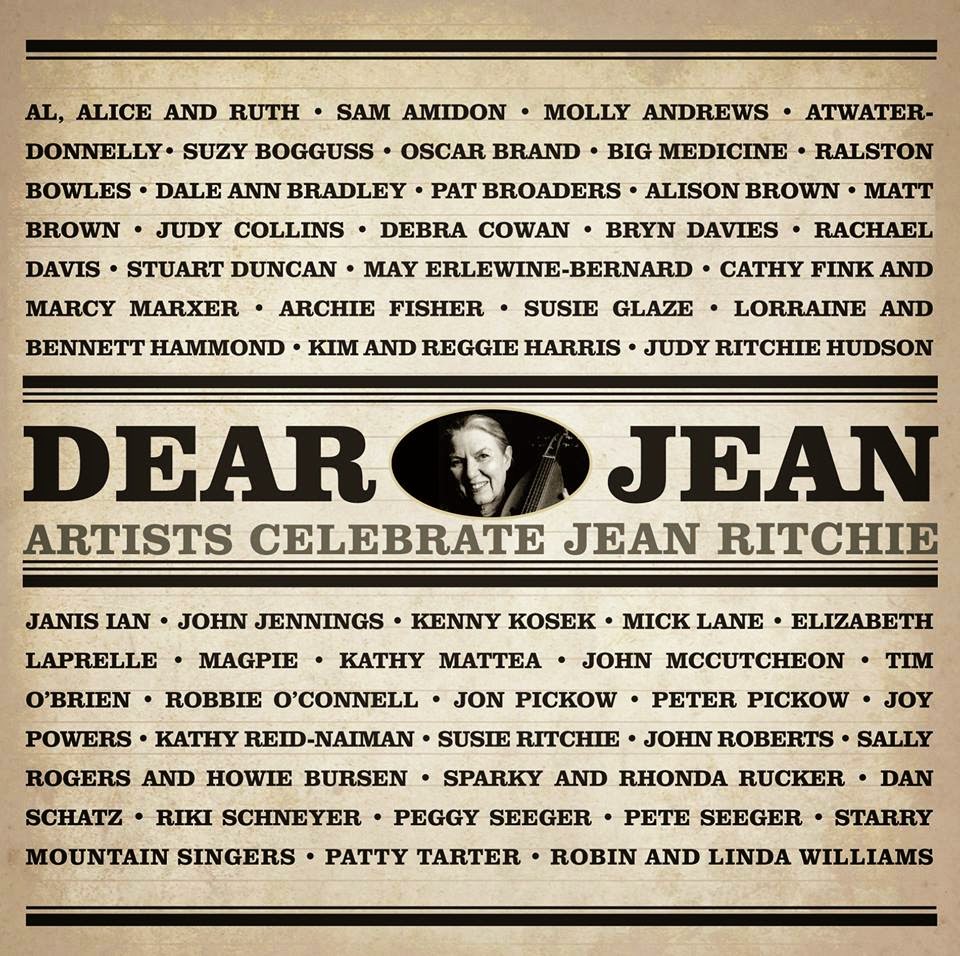 Jean Ritchie, now 91 years old, was born in 1922 to a rural Kentucky family with a rich legacy of singing and preserving the traditional ballads that originated centuries ago in the British Isles and were handed down from generation to generation in the Appalachian Mountains.

Jean arrived in New York City in the 1940s as a social worker but quickly became an important part of a folk scene that included such contemporaries as Woody Guthrie, Lead Belly, Pete Seeger, Alan Lomax and Oscar Brand.

In a career that remained vital until she suffered a stroke in 2009, Jean's contributions were highly significant on a number of levels. She was, of course, a source singer for the many traditional ballads in the Ritchie Family tradition – many of which became standards of the folk revival. She was a folksong collector of note in both the southern United States, and in the British Isles. She was responsible for popularizing the Appalachian dulcimer during the folk revival. She was a compelling singer and she was one of the greatest and most authentic of traditionally-steeped songwriters.

On the two CDs of Dear Jean: Artists Celebrate Jean Ritchie, a remarkable group of artists – some very famous, some relatively unknown – pay tribute to Jean’s legacy with loving, joyous performances of 37 songs, many of them Jean’s own songs, others traditional folksongs from her repertoire.

While every one of these tracks is more than worthy of praise, I’ll call attention to just a few of my favorites. Among Jean’s own songs that list would have to include the version of the environmental song “Black Waters” that features John McCutcheon, Tim O’Brien and Suzy Bogguss trading verses; “The L&N Don’t Stop Here Anymore” by Robin & Linda Williams; an almost chamber-folk interpretation of “Morning’s Come, Maria’s  Gone” by Janis Ian; a chilling a cappella rendition of “West Virginia Mine Disaster” by Susie Glaze; a lovely, piano-based version of “One I Love” by Judy Collins; a joyous interpretation of “Roll On Clouds in the Morning” by Kim & Reggie Harris; and a sweet “My Dear Companion” by Cathy Fink & Marcy Marxer.

Among the traditional songs, I particularly like the versions of “Pretty Betty Martin” by Kathy Reid-Naiman; “Shady Grove” by Sparky & Rhonda Rucker; “Jubilee” by Kathy Mattea; “Fair Nottamun Town,” sung in two-part a cappella harmony by Elizabeth LaPrelle with Sandy Newlin LaPrelle; the driving, old-time rendition of “Jemmy Taylor-O” by Big Medicine and "Hangman," sung conversationally by Ralston Bowles & May Erlewine-Bernard.

The album ends with Jean herself and live recording of “The Peace Round” recorded in 1992 with overdubbed harmony vocals by many of the artists who contributed to this collection.