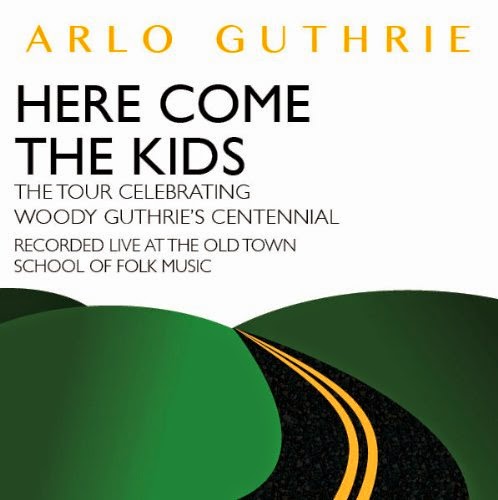 The centennial of the birth of the great folksinger and prototypical songwriter Woody Guthrie (1912-1967) was July 14, 2012. Since around that time Arlo Guthrie has been out on tour celebrating his father’s milestone with a tour – and now, a 2-CD live album recorded last October at the Old Town School of Folk Music in Chicago – called Here Come the Kids.

While Arlo has usually included some Woody Guthrie songs in his concerts and on his albums, about half the songs in this set were written by Woody and most are introduced with stories – Arlo is a master storyteller with perfect timing – about Woody or the songs.

Among the classic Woody Guthrie songs are great versions of “Oklahoma Hills” (credited to Woody and his cousin, Jack Guthrie, who had a hit with it in 1945), “Pretty Boy Floyd,” “Deportee (Plane Wreck at Los Gatos).” “Do Re Mi,” and a sing-along version of Woody’s best known song, “This Land is Your Land.”

“Deportee (Plane Wreck at Los Gatos),” by the way, is always considered to be part of the classic Woody Guthrie canon, but Woody's words about a tragic 1948 plane crash were set to music in the late-1950s by Martin Hoffman. More recently, Nora Guthrie, Arlo’s sister, has been commissioning many artists to set some of the 3000+ sets of Woody’s lyrics discovered in the Woody Guthrie Archives to music. Early in the concert, Arlo does a lovely version of “Mother’s Voice (I Hear You Sing Again,” Woody’s tribute to his mother and the songs he heard her sing, which was set to music by Janis Ian. And then, as the encore, he concludes the concert with the inspiring “My Peace,” set to music by Arlo himself.

Arlo also uses the concert to pay tribute to some of Woody’s friends and musical associates with versions of “St. James Infirmary,” learned from Cisco Houston, and “Alabamy Bound,” picked up via Lead Belly. Along the way, we also hear stories about other of Woody’s friends including Pete Seeger, Ramblin’ Jack Elliott, Sonny Terry and Brownie McGhee.

There are also some perennial favorites like Steve Goodman’s “City of New Orleans,” and Arlo’s own “Motorcycle Song” and “Coming into Los Angeles.” The most poignant moment comes when Arlo sings a beautiful version of “Highway in the Wind,” the first song he wrote for Jackie Guthrie, his wife of 43 years, who succumbed to cancer on October 14, 2012, a year – almost to the day – before the concert at the Old Town School of Folk Music was recorded.

Throughout the concert Arlo receives tasteful backup from Bobby Sweet on guitar and fiddle and from longtime musical associates Terry A La Berry on drums and Abe Guthrie, Arlo’s son, on keyboards.

Arlo Guthrie is one of our finest live performers and superbly recorded live albums (credit Abe for that) like Here Come the Kids are the next best thing to being in the audience.