The Mayor of MacDougal Street: A Memoir

In view of all the recent attention from the film Inside Llewyn Davis, here is my review of  The Mayor of MacDougal Street: A Memoir that was published in the Montreal Gazette in 2005. 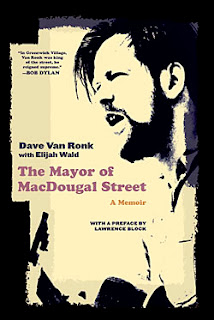 In Chronicles: Volume One, published last year, Bob Dylan recalled Dave Van Ronk, the influential Greenwich Village folk and blues singer he learned from - and often borrowed couch space from - in his first year or two on the New York folk scene: "Van Ronk could howl and whisper, turn blues into ballads and ballads into blues. I loved his style. He was what the city was all about. In Greenwich Village, Van Ronk was king of the street, he reigned supreme."

MacDougal, in the heart of Greenwich Village in lower Manhattan, is the street Dylan is referring to. In 1961, when Dylan landed in the Village, MacDougal St. was filled with coffeehouses like the Gaslight and the Commons, where the folksingers plied their trade, bars like the Kettle of Fish, where they drank and played cards all night, and Izzy Young's Folklore Centre, where they hung out all day. Sometime in the early 1960s, a bartender at the Kettle of Fish bestowed the title of Mayor of MacDougal Street on Van Ronk, and the appellation followed him for 40 years.

Van Ronk, who died in 2002, grew up in Brooklyn and Queens and arrived in Greenwich Village as a teenage musician in 1951. He started out playing in traditional jazz bands, discovered an affinity for rural blues and became one of the major players in the folk and blues revivals of the 1950s and '60s.
In this always engaging and frequently laugh-out-loud funny memoir, Van Ronk looks back at those groundbreaking years, telling his own story and giving us an insider's view of how the folk revival, particularly in Greenwich Village, developed, boomed and collapsed. While most accounts of this period, including Dylan's own, begin with Dylan's arrival in the Village in 1961, Van Ronk gives us an insightful description of the development of the scene that Dylan and countless others were drawn to and swept up in. I've read most of the books that have been written about that time and place. This one may well be the best, as a historical narrative, a critical analysis of the music and the musicians who made it - and as an altogether enjoyable read.

Van Ronk was a natural raconteur who honed his gift for storytelling at thousands of concerts and club shows over a career that lasted almost 50 years. He and blues scholar Elijah Wald had begun working on this book when Van Ronk was diagnosed with cancer in 2001. After Van Ronk died, Wald finished the project by drawing on recordings of Van Ronk in concert and an extensive collection of radio, television and documentary film interviews.

Wald has done a superb job of putting Van Ronk's words on paper. I knew Van Ronk and felt like I was hearing his voice as I read through these pages. In fact, one of Van Ronk's interviews used by Wald in completing this book was with me on Folk Roots/Folk Branches, my CKUT radio program, done at the time of Van Ronk's last trip to Montreal for two concerts at the jazz festival in 1998.

Van Ronk performed regularly in Montreal throughout his career. One of his live albums was recorded in 1967 at Sir George Williams University, and he played at local folk venues like the New Penelope and the Back Door. In the 1970s and '80s, he played at the Golem, the Stanley St. folk club that I ran then.

Van Ronk vividly recalls many of the musicians he shared the scene with, from legendary blues artists like Brownie McGhee, Mississippi John Hurt and Reverend Gary Davis to the young singer-songwriters like Dylan, Tom Paxton, Phil Ochs and Joni Mitchell who came to the fore in the 1960s.

One particularly funny story recounts a night at the Kettle of Fish when Hurt, a small and gentle songster already in his 70s, beat Van Ronk and a succession of other musicians, bigger of size and 40 years younger, at arm wrestling.

Another hilarious story he tells is about Albert Grossman, Dylan's manager, out to prove how powerful he could be in the music business. Grossman offered to guarantee Van Ronk $100,000 for a year's worth of bookings if he'd perform wearing a helmet with horns and change his name to Olaf the Blues Singer. Van Ronk turned Grossman down but slyly confides he might have done it for $120,000.

Although Van Ronk's memoir ends as the 1960s fade away, he stayed in Greenwich Village for the rest of his life, making music that seemed to just get better as he aged and mentoring succeeding generations of young performers.


Posted by Mike Regenstreif at 7:56 PM