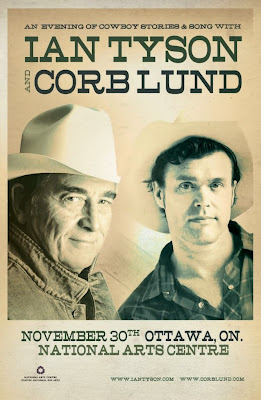 I was born in Calgary and spent about eight years – off and on – of my childhood there. Although I haven’t lived there since 1967 when I was 13, and have visited only briefly since (most recently about 25 years ago), there must be something about all those Calgary Stampedes I attended as a kid that became part of me because I’ve always had a deep appreciation for cowboy music and lore and have written extensively about cowboy music ever since Ian Tyson sparked its renaissance about 30 years ago with Old Corrals and Sagebrush, an album of traditional and new cowboy songs.

Last night, Ian, the 80-year-old master of cowboy songs, and Corb Lund, a couple of generations younger but whose authenticity is in both his jeans and his genes, brought their evening of cowboy stories and songs – a show they created to mark the centennial of the Calgary Stampede in 2012 – to the National Arts Centre’s Southam Hall in Ottawa. Judging by the reaction anytime Ian or Corb mentioned someplace in Alberta – from the Ranchman’s club in Calgary to the town of Dogpound – I was far from the only former Albertan among the 2,000 or so folk in the audience.

The show began with Ian walking out to a standing ovation – the first of three for the evening – and settling on the edge of his stool for a solo rendition of “My Doney Girl,” the traditional cowboy song. It was immediately evident that the reports that Ian had his wonderful voice back were true. As I noted in this concert review from 2009, “a combination of vocal scarring and a bad virus took away the familiar smoothness and much of the range from the great tenor we’d known for 45 or so years.” Ian performed and recorded for about five years with what he called his “new voice” before undergoing vocal cord surgery late last year.

After that first song, Corb Lund and bassist Kurt Ciesla entered and settled in for a folk festival workshop-style evening in which Ian and Corb traded western songs, all but a couple written by one or the other, occasionally traded verses on each other’s songs, played backup guitar and sang harmonies for each other, and introduced almost every song with a story about it or about the person who may have inspired it. Kurt, whose playing was superb throughout the evening, was the sole sideman.

Among the many highlights of Ian’s songs were “M.C. Horses,” “Bob Fudge,” “Will James,” “Charlie Goodnight’s Grave," and  “The Gift," about legendary western artist Charlie Russell. Corb’s highlights included “Five Dollar Bill,” the hilarious “Cows Around” and the poignant closer, “The Rodeo’s Over.”

But the most special moments came when the entire audience joined in on singing the traditional “Leaving Cheyenne (I Ride an Old Paint)” and such classics of Ian’s as “Someday Soon,” “Navajo Rug,” a co-write with Tom Russell that was requested from the audience, and the encore-capper, “Four Strong Winds,” the song (justifiably) selected by CBC radio listeners in 2005 as the greatest Canadian song of all time.

A great night of cowboy music and a highlight in the fine NAC Presents series of Canadian music now in its third season.

Posted by Mike Regenstreif at 4:43 PM