David Francey – So Say We All 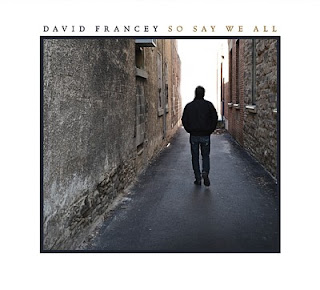 DAVID FRANCEY
So Say We All
Laker Music
davidfrancey.com

As I’ve noted before, David Francey, then in his mid-40s and a carpenter by trade, emerged in the late-1990s as one of Canada’s most significant and accomplished singer-songwriters. His songs are distinguished by their beautifully-crafted, poetic lyrics and memorable, traditional-sounding melodies. On So Say We All, as on the nine previous albums he’s released since 1999, David surrounds himself with a small group of creative acoustic musicians who help bring out the best in his songs without ever getting in the way.

David notes in the CD booklet that he recorded this album following what had been “a very difficult year,” that recording it “was a pathway up and out from under.”

Indeed, several of the songs reflect themes of depression and hopelessness. “Harm,” which sounds like an Appalachian folksong thanks to Chris Coole’s banjo arrangement, captures the feelings of someone at the deepest depths of depression longing to climb out again. “Cheap Motel,” reflects the loneliness that is part of many road musicians' day-to-day life, while “Ordinary Man” presents a series of scenes – the military, a dead end job, prison – in which an ordinary man is trapped, and “Satellite,” shows the emptiness of staring at the ground on a dark night while the wonders of the heavens are there to behold by just looking up.

Despite these, and several others, the album is not all dark. There is the hopefulness of finding love in “Weather Vane” and the renewal of the human spirit reflected in “Blue Skies,” a song inspired by the Blue Skies Folk festival.

Even when David is singing about darkness, there is much to learn and understand about the human spirit – and that is a mark of great songwriting.