The Good Lovelies – Live At Revolution 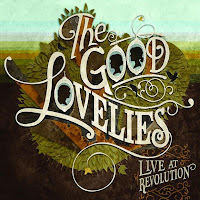 The Good Lovelies, the always charming harmonizing trio of Caroline Brooks, Kerri Ough and Sue Passmore, have gone the live route for their fourth full length album and, typical of their concerts, it’s a delightful blend of new material and standout songs from earlier albums and several excellent interpretations of well chosen covers.

Among the familiar Good Lovelies tunes are versions of “I Want” and “Lie Down” that are both a lot of fun. It sounds like the whole audience was happily singing and clapping along on “Lie Down.”

Of the new Good Lovelies songs my favourite is “Tuesday Night,” which seems like a nice blend of old-time music – thanks in large part to the rhythms of Caroline’s banjo playing – and classic pop balladry.

The two killer cuts for me, though, are their stunning takes on a couple of very familiar songs. They strip the honky-tonk off of “Juanita,” a Gram Parsons and Chris Hillman song from the first Flying Burrito Brothers LP, and re-imagine the song as an a cappella song of redemption. Then, they end the album with a beautiful, compelling version of Leonard Cohen’s “Hallelujah,” that’s as fine as any version I’ve heard.

As I noted a couple of years ago in my review of Let the Rain Fall, “The Good Lovelies’ arrangements blend folk, country, jazz and swing influences into something that’s always quite appealing, always very musical, and, almost always, lots of fun to listen to.” That still holds true on Live At Revolution.

Throughout the album, the three members of the Good Lovelies seamlessly swap lead vocals and harmonies and, from song to song, swap around the banjos, guitars and mandolins. They also receive some excellent support on most of the album from bassist Paul Mathew and multi-instrumentalist MVP Christine Bougie. Les Cooper also adds mandolin or guitar to a few songs.