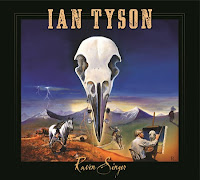 In 2008, in my Montreal Gazette review of Ian Tyson’s then-new album, Yellowhead to Yellowstone and Other Love Stories, I wrote, “For more than 40 years, from the first Ian and Sylvia LP in 1962, through 2005’s Live at Longview, Ian Tyson consistently sang with one of the finest male voices in folk and country music. But now, at 75, vocal cord scarring and a bad virus have given the old cowboy what he calls his ‘new voice.’ It’s hoarse and gritty, even whispery à la Dylan or Waits. But Tyson pulls it off. He remains one of the greatest songwriters ever and he still knows how to communicate the essence of a song.”

The next year, reviewing an Ottawa concert, I noted my at my surprise at “how strong Ian’s singing seemed to be. While it was certainly not what it was back in 2006, Ian’s voice seemed to be considerably stronger than it was on Yellowhead to Yellowstone and other Love Stories… Ian’s unique timbre and vocal inflections were there. There was no mistaking the singer.”

On his new album, Raven Singer, recorded song-by-song over the past three years, Ian has fully grown into his new voice and uses it to great advantage in communicating a mixture of six new songs (there is also a CD-concluding instrumental) and three older, reimagined songs that continue to distinguish him as one of the greatest folk and western singer-songwriters of all time. Now closer to 80 than 75, Ian’s ability to tell a story in song, to produce new material and to infuse new vitality into older songs is undiminished.

Among the new songs are such gems as “Charles Goodnight’s Grave,” inspired by the legendary cattle rancher who forged the Goodnight-Loving cattle drive trail in 1866 (Ian recorded Utah Phillips’ song, “The Goodnight-Loving Trail” on one of his Columbia LPs, but it was one of the songs unfortunately left off the CD compilation, Old Corrals and Sagebrush & Other Cowboy Culture Classics), and “Saddle Bronc Girl,” inspired by Ian’s daughter, a rodeo barrel racer.

Among the older songs given new life is “Blueberry Susan,” which was on Ian’s first solo LP, Ol’ Eon, almost 40 years ago. As on the earlier version, Ian begins the songs as a tribute to the first guitar player he ever knew, and an early love, but on this new version he also pays tribute to Red Shea, Monte Dunn and my old friend David Rea, three great guitarists Ian worked with in the old days who have passed away in recent years.

Other highlights include “Rio Colorado,” “Back to Baja,” and the new versions of “Under African Skies” and “The Circle is Through.”