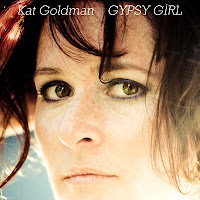 (This review is from the April 23, 2012 issue of the Ottawa Jewish Bulletin.)

In 2004, Kat Goldman was a promising Toronto-based singer and songwriter preparing to move to New York where her music was causing a stir. Goldman’s first CD, The Great Disappearing Act, had been released in 2000 to critical acclaim and “Annabel,” a song from that album, found favour with a number of other artists, including the Winnipeg band, The Duhks, who recorded it on a Juno-nominated CD. The song also inspired the Giller Prize-nominated novel, Annabel by author Kathleen Winter.

But the move to New York never happened because Goldman was seriously injured when a car crashed into a bagel shop she was visiting, necessitating multiple surgeries and two years of rehabilitation. She came back with a second CD, Sing Your Song, in 2007, and has now released the lovely Gypsy Girl, her third.

Reflecting the transitory implications of her album’s title track, Goldman now divides her time between Toronto and Boston where she studies English literature at Harvard and Boston Universities. Some of the songs were recorded in Boston and some in Toronto; all of them written with poetic craftsmanship and compelling melodies enhanced by arrangements which blend both folk and pop influences.

Among the highlights are “World Away,” inspired by her intertwined lives as a Toronto singer and songwriter and Boston student; “Letter From Paris,” in which she seemingly escapes or hides from both identities; and, perhaps, best of all, “Gypsy Girl,” in which she sings about the compulsion to move and to travel and to explore new places which drives so many artistic souls.