Eric Bibb – Deeper in the Well 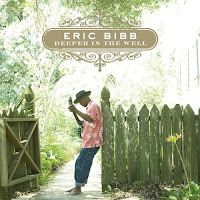 Although he’s been an accomplished musician since he was a teenager in the 1960s, Eric Bibb really only landed on my radar in 1998 with the release of an inspired and inspiring album called Good Stuff.

I soon discovered Eric was the son of actor and folksinger Leon Bibb (who was a prominent participant in the post-War folk revival) – and the godson of Paul Robeson and the nephew of pianist John Lewis of the Modern Jazz Quartet, talk about a musical pedigree – and that I was previously unfamiliar with Eric because he’d spent most of his career living and performing in Europe.

Good Stuff launched Eric’s career in North America and he was soon a significant presence on the folk, blues and jazz festival circuit. He was my guest several times on the Folk Roots/Folk Branches radio program when he’d come to play at the Montreal International Jazz Festival.

Since Good Stuff, Eric has recorded prolifically, both solo albums and collaborations with other artists, and I’ve written about many of them here and in various publications. These albums have almost always been among my favourites for any year they’ve been released and are all albums I’ve returned to often over the years. His new album, Deeper in the Well, will be no exception.

To keep all of his recordings sounding fresh, Eric has done things a little differently from album to album. This time around, he travelled to Louisiana to record at Dirk Powell’s studio in Pont Breaux with Dirk, who plays just about anything with strings, plus accordion; fiddler Cedric Watson; drummer Danny DeVillier; harmonica player Grant Dermody, who contributed so much to Eric’s Booker’s Guitar album in 2010; and Christine Balfa on Cajun triangle.

A little over half the album’s songs are Eric’s originals, including “Bayou Belle,” the appropriately swampy opening track that blends the acoustic blues Eric is so expert at with the Cajun and Creole influences of Louisiana.

As with all of Eric’s albums, it’s hard to pick favourites. But a few of mine from initial listening would include “Money in Your Pocket,” a count-your-blessings kind of song co-written with Michael Jerome Browne; “Music,” an infectious celebration of music-making; a happy sounding version of “Dig a Little Deeper in the Well,” learned ago from Doc Watson; and a thoughtful version of Bob Dylan’s “The Times There are A-Changin’” which Eric makes sound as vital in 2012 as it was almost half a century ago. 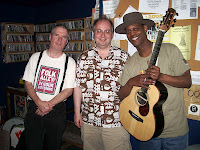 While it doesn’t say so in the credits, there are a couple of equally excellent tracks that I suspect were recorded, at least partially, elsewhere. Eric’s “In My Time,” which contrasts good times and hard times, brings together Eric’s soulful singing, and fluid, finger-picked guitar, with the sublime playing of dobro-master Jerry Douglas; and an almost West African-sounding version of Taj Mahal’s “Every Wind in the River” features back-up by master-of-all-roots music Michael Jerome Browne and studio wiz Michel Pepin, both of Montreal.

As mentioned, Deeper in the Well is yet another Eric Bibb album I’ll be listening to years from now.