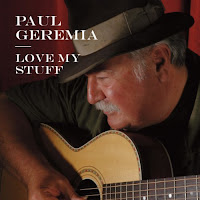 As I noted in my Sing Out! magazine review of his 2004 album, Love, Murder & Mosquitos, I was a teenager and Paul Geremia was in his mid-20s when I first encountered him at the Back Door Coffee House in Montreal, circa 1969 or ’70. Paul was certainly a factor in my developing a taste for traditional country blues and he’s remained one of my all-time favorite revivalists of pre-war blues traditions, and one of my favorite songwriters within the idiom. Now, after more than 40 dedicated years of playing the music, and despite the fact that he came from outside the culture that originally produced the genre, I am almost loath to still think of Paul as a revivalist; the blues have become as much a part of Paul’s essence as anyone who was born to them.

Love My Stuff is a great 18-song live collection built from many gigs recorded over a long period of time at various locations. While most of the tracks are from the past decade, a few stretch back about three decades. And while most of the performances are solo, Paul singing with his guitar and, sometimes, harmonica, the terrific swinging version of “Dr. Jazz,” a great old King Oliver tune from the 1920s – also done by Jelly Roll Morton – adds Rory MacLeod on bass, and Sleepy John Estes’ “Special Agent,” features Rich DelGrosso on mandolin, in effect playing Yank Rachell to Paul's Sleepy John.

A few of the other highlights include nifty versions of Blind Lemon Jefferson’s “Shuckin’ Sugar Blues” and “Silver City Bound,” Lead Belly's tribute to Blind Lemon; Blind Willie McTell’s “Savannah Mama,” featuring Paul’s soulful slide work; and a terrific version of “See See Rider,” one of the most popular of the early traditional blues songs featuring some great singing and guitar and harmonica playing.

The vast majority of these songs date from the pre-World War II era. But there are three examples of Paul’s excellent songwriting. “Cocaine Princess” is a clever kiss-off tune to a messed-up woman who wasn’t the woman of his dreams, while “Where Did I Lose Your Love,” is a blues for a woman who might have been. Then, on the infectious “Kick It In the Country,” he sounds like he might be singing to a woman who falls somewhere in between the princess and the woman whose love he lost.

I’ve seen Paul play lots of concerts over the past four decades – I booked him a lot at the Golem, the Montreal folk club I ran in the 1970s and ‘80s – and have never been disappointed at the beginning, middle or end of an evening. I’ll say the same about this live album. Paul Geremia is one of the great ones, he is.