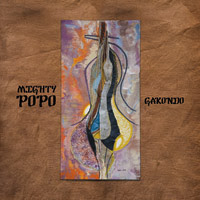 MIGHTY POPO
Gakondo
Borealis
mightypopo.ca
The bio on his website tells me I can say Mighty Popo (Popo Murigande), the Ottawa-based singer, songwriter and masterful guitarist is “a Rwandan/Burundian refugee/survivor whose music is steeped in African tradition.”
Although I’ve heard and highly enjoyed Mighty Popo live several times, primarily at the Ottawa Folk Festival, I was unprepared for the remarkable beauty of Gakondo, his first all-acoustic album. The singing, playing and arrangements – some solo, some featuring backup by African and Canadian musicians and singers – are utterly compelling, from the title track, a song about Popo’s family history, which opens the album to “Rwampunga,” an adaptation of a Rwandan traditional song, at the end. The album is a stunning investigation of the traditional musical roots of Mighty Popo’s heritage,
Popo sings all of these songs in Kinyarwanda, a Rwandan language. Except for brief references to some of them in the liner notes, I have no idea what most of them are about. But, even for a lyrics-oriented listener like me, it hardly seems to matter. Mighty Popo’s soulful musicality and quietly-hypnotic performances, even when he whispers on "Nibarize," seem to communicate all that is necessary for a complete appreciation.
--Mike Regenstreif
Posted by Mike Regenstreif at 2:51 PM