My thoughts and best wishes are with my friend of 40+ years Jesse Winchester as he battles cancer of the esophagus.
Jesse has cancelled his concert schedule while he undergoes treatment for the rest of the year.
Jesse is one of the great singer-songwriters of our time and there was a significant period of time when we on the Montreal folk scene had him almost to ourselves.

Three quick anecdotes:
Jesse played often at the Golem, the Montreal folk club I ran in the 1970s and ‘80s. I took over the club at the end of May 1974 and Jesse’s first gig there was at the beginning of August. This was right about the time that his third LP, Learn to Love It, came out and all three nights were sold-out. Jesse, in those days, was not able to perform in the U.S. but was already attracting a lot of attention for his songwriting. A reporter from Rolling Stone magazine showed up and covered the gig as part of a story about Jesse. I believe it was the first time that Rolling Stone had ever covered a Montreal story. 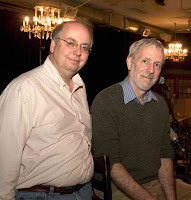 In November 1975, I was a backstage guest of Ramblin’ Jack Elliott (another Golem performer) at the Rolling Thunder Revue's first Toronto concert. During the concert, Joan Baez dedicated a song to Jesse (Dave Loggins’ “Please Come to Boston” which has a line, “I’m the number one fan of the man from Tennessee”). I met Joan for the first time at the Rolling Thunder party after the show. When I mentioned that Jesse was a friend, Joan spent about half an hour grilling me about him.
In 1999, when Jesse released his first new album in 10 years, I was honoured that he chose to debut the album as a guest on the Folk Roots/Folk Branches radio show.
I know that I speak for all his friends and fans in wishing Jesse a speedy recovery.
--Mike Regenstreif
Posted by Mike Regenstreif at 11:37 AM