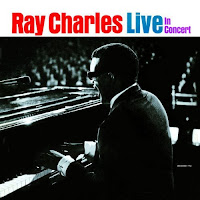 RAY CHARLES
Ray Charles Live in Concert
Concord
concordmusicgroup.com
I saw Ray Charles live four or five times, mostly in concert halls like Place des Arts in Montreal. The shows were great – like, how could a Ray Charles show not be great? – but, they had settled into a kind of greatest hits routine formula in the last couple of decades of his touring career. But, what a formula it was. Charles’ genius lay in his organically combining so many different styles at the roots of American music – gospel, blues, jazz, R&B, country, even traditional folk music – into his singular, soulful style.
The first Ray Charles show I ever saw was, to my memory, the best and the most unusual. Unusual, to me, at least, in its setting in a huge hotel ballroom with the audience of thousands seated 10 or so to a table. It was New Year’s Eve in Miami Beach as 1976 gave way to 1977. My friend Paul Levine and I had driven down to Florida from Montreal on a whim for a winter vacation and were happy to find something we were excited to do on New Year’s Eve. The table service was weird. You couldn’t order a single drink at your table; only full bottles of expensive liquor. I’d never seen anything like that before, or since. It was a loud, obnoxious place filled with a loud, obnoxious crowd. But, when Ray Charles and his orchestra came on, he commanded the place and blew the roof off.
Listening to the expanded (19 tracks, the original LP was 12) reissue of Ray Charles Live In Concert, recorded in 1964, I’m hearing a show that reminds me much more of that Miami Beach show from a dozen years later, than the 1980s and ‘90s performances I saw at Place des Arts.
The recorded concert is a big band affair with Ray at the piano (and, occasionally, organ) with fabulous rhythm and horn sections, and the Raylettes, who add their gospel-infused, call-and-response vocal harmonies to a few songs.
The program ranges from swinging jazz instrumentals like “One Mint Julep,” to R&B classics like “What’d I Say,” to reimagined country songs like “You Don’t Know Me,” and humorous vaudeville tunes like “Two Ton Tessie.”
Among my very favorite tracks are Charles’ versions of “In the Evening (When the Sun Goes Down)” adapted from Lead Belly’s adaptation of Leroy Carr’s original from the 1920s; a lovely version of “That Lucky Old Sun”; and a stunning seven-minute performance of Hoagy Carmichael’s “Georgia On My Mind,” in which Charles’ organ beautifully replaces the orchestral strings from his studio recording.
I’m glad I got to see Ray Charles live on several occasions and I’m very happy to be able to relive the experience via this CD.
--Mike Regenstreif
Posted by Mike Regenstreif at 5:22 PM