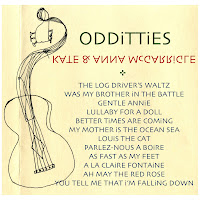 It was always wonderful, over the years, to have new music from Kate and Anna McGarrigle. Now, less than a year after Kate’s untimely passing, it’s a particularly wonderful, albeit bittersweet, to have these new recordings to savour.

Well, not exactly new. Oddities is a collection of a dozen songs that Kate and Anna recorded for various projects, and in various circumstances, between 1973 and 1990 but never previously released, or never released in the versions included on this new CD. It’s a compilation that Anna says she and Kate had long talked about putting together but kept putting off for another year. Many of the tracks are alternate versions of songs that have been heard on other projects. And even if almost all the songs are familiar, they sound fresh and new in these previously unreleased versions.

Kate and Anna grew up singing Stephen Foster songs – “These were songs that my daddy taught me,” sang Kate in “The Work Song” – and Oddities begins with a set of four of Foster’s 19th century parlour songs.

The first two Foster songs, the sad lament, “Was My Brother in the Battle,” and the hopeful anthem, “Better Times are Coming,” both written in 1862, are alternate versions of songs recorded by Kate and Anna for Songs of the Civil War, a companion CD of songs to the Civil War documentary series that Ken Burns did for PBS about 20 years ago.

The third Foster song, “Gentle Annie,” written in 1856, was previously released by Kate and Anna in collaboration with Linda Ronstadt on The McGarrigle Hour. For as long as I knew her, which was close to 40 years, “Gentle Annie” was always one of my favourite songs to hear Kate sing. With apologies to Bob Dylan, who wrote “that nobody can sing the blues like Blind Willie McTell,” nobody could sing “Gentle Annie” like Kate McGarrigle. Utah Phillips, another old friend now gone, was inspired to write his song, “Nevada Jane” after hearing Kate sing “Gentle Annie.” Anna’s harmonies on the track are, of course, sublime.

“Ah May the Red Rose,” the final Foster song, dates from 1850 and is a short, sad, beautiful song sung by Anna (with Kate supplying the sublime harmonies) that laments death and mourning.

The Foster songs are followed by two of the late Wade Hemsworth classics including, finally on CD, a version of “The Log Driver’s Waltz,” a song that the McGarrigles began singing back in the 1960s when they were part of the Mountain City Four. The song, of course, is best known from John Weldon’s animated short film featuring a different arrangement of the song (Kate’s voice begins this rendition while Anna’s begins the version in John’s film). “The Log Driver’s Waltz,” is another song that’s been one of my favourite McGarrigle performance pieces going back to the first concerts I produced for them at the Golem in Montreal in 1974 and 1975.

The other of Wade’s songs is a choral arrangement of “My Mother is the Ocean Sea,” an other-worldly sounding song that Kate and Anna also sang on a CBC broadcast recording many years ago. They also include a version of “As Fast As My Feet,” co-written by Anna and Chaim Tannenbaum, which was also on that CBC recording. It’s a zippy, infectious number that, in an era where a hook, a great melody and catchy arrangement meant something, could have been a hit single.

There are a couple of French songs in the set beginning with a live version of the traditional “A La Claire Fontaine” that was recorded at one of the Pollack Hall concerts with Kate and Anna that I produced in 1976.

The other French song is a Cajun number, “Parlez-Nous À Boire,” adapted from the repertoire of Louisiana’s legendary Balfa Brothers. It’s one of the rockingest numbers Kate and Anna have done.

“Lullaby for a Doll,” written by Kate, is a lovely song about childhood innocence, a version of which was included on ‘Til Their Eyes Shine, a 1992 collection of lullabies by various artists.

“Louis the Cat,” written by Anna and Audrey Bean, is a lament for a lost cat and is a living room demo recorded in 1973. I can’t say that I have any memory of the song from back in the day, but it’s still nice to hear after all these years.

Oddities ends with a version of “You Tell Me That I’m Falling Down,” a song written by Anna and Carol Holland that Linda Ronstadt recorded in 1975. Listening to this highly-arranged version, I think this track was probably either an album demo or outtake that didn’t get used. I remember Anna and Kate singing it at the Golem in 1975, and occasionally over the years, and always hoped they’d put it on an album; finally, here it is for us.

Oddities takes its place in a discography in which almost every album Kate and Anna recorded must be regarded as an essential recording. These are songs to warm our hearts as we head into the cold winter months.